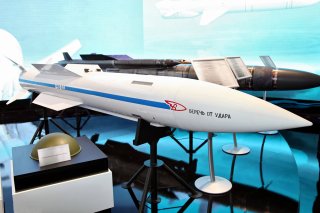 “We have carried out a test, and a successful one,” Putin said at a recent finance conference. “As of next year, we will have another sea-based missile, a hypersonic one. Mach 9. The time of approach to those who issue orders will be five minutes.” Putin was referring to the 3M22 Tsirkon, a new hypersonic anti-ship cruise missile that is slated to enter service sometime in 2022.

Putin couched Russia’s ongoing investments in hypersonics in the context of perceived “threats” from NATO’s easternmost military infrastructure. “Now, the situation has come to a point that anti-ballistic missile defense systems are being deployed in Poland and Romania,” he said. “And the MK-41 launchers stationed there can have Tomahawk strike systems mounted on them. This creates threats for us.”

“In response, we had to commence work on developing hypersonic weapons. This is our response,” Putin added. He noted it was Washington that first withdrew from the Intermediate-Range Nuclear Forces and Anti-Ballistic Missile arms treaties.

Putin brushed away concerns about China’s recent hypersonic glide vehicle test and instead shifted the focus to U.S. capabilities. “We saw the reaction of our American partners in this regard. But we do know that our American partners are slightly ahead in development of hypersonic weapons after all,” he said. “They simply don’t talk about it and nobody is making a fuss about it. Just like nobody made a fuss when they tested their anti-satellite weapon ten years ago, which they have now. When Russia carried out such test just recently—then it was a fuss around the world.”

Putin’s comments mark one of the first times when a top Russian official publicly offered what can be interpreted as a relatively positive assessment of U.S. capabilities in the domain of hypersonic weapons. Russian experts and commentators have consistently dismissed, downplayed, and even mocked U.S. hypersonic weapons programs in recent years.

Putin did not elaborate on his comparative assessment of U.S. and Chinese capabilities, which defies the consensus of top U.S. defense officials and military experts. “We’re not as advanced as the Chinese or the Russians in terms of hypersonic programs,” Gen. David Thompson, the vice chief of space operations, said last month at the Halifax International Security Forum.

China showcased its DF-ZF hypersonic glide vehicle during a 2019 military parade; the system achieved initial operating capability status that same year. In addition to their sweeping investments in hypersonic missile technology, it was revealed earlier this year that China’s defense industry is conducting cutting-edge research into unmanned aerial vehicles capable of traveling at hypersonic speeds.

The U.S. military is due to receive its first hypersonic system—the Army’s Long Range Hypersonic Weapon—by fiscal year 2023, with the Navy’s hypersonic Conventional Prompt Strike weapon not far behind.