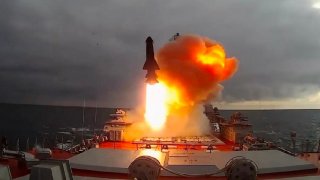 Russia’s Tsirkon hypersonic missile was successfully test-launched in the White Sea, according to a statement issued by Russia’s Defense Ministry earlier this week.

“The test-fire was conducted from the White Sea against a target position located at a distance of over 400 km,” the statement read. “The data recorders indicate that the hypersonic missile flight’s complied with the designated parameters. The test-launch from the frigate Admiral of the Fleet of the Soviet Union Gorshkov has been successful and the target has been wiped out.” The statement was accompanied by a brief video of the test launch, published on Monday by the Defense Ministry’s YouTube channel. The eighteen-second clip shows what appears to be a Tsirkon missile being launched in nighttime conditions. The launch comes shortly on the heels of another Tsirkon test from Admiral Gorshkov on November 18; that test launch was also accompanied by a brief video, filmed in a similar style to the one that succeeded it. In keeping with standard Russian military practice, Northern Fleet vessels and naval aviation units were dispatched to cordon off the area.

Russian navy officials previously announced that the Tsirkon missile has entered its final stage of acceptance trials, with five test launches planned from November to December. Russian state media reported earlier this week that the first serial batch of Tsirkon missiles has entered production in the town of Reutovo, located in the broader Moscow region.

The 3M22 Tsirkon, also known as Zircon and by the North Atlantic Treaty Organization reporting name SS-N-33, is a winged, hypersonic anti-ship cruise missile that entered state trials in 2018. The missile was unveiled, along with four other advanced weapons systems, by Russian president Vladimir Putin during his 2018 state-of-the-nation address. The upcoming missile can reportedly reach speeds of up to Mach 9, or around 6,900 miles per hour, and is widely speculated to boast an effective range of up to 1,000 kilometers against any target.

The Northern Fleet’s Admiral Gorshkov, the lead ship of the Project 22350 Admiral Gorshkov-class frigates, has served as a frequent testbed for Tsirkon, launching the missile at least seven times from January 2020 onward.

According to prior Russian media reports, Admiral Golovko, the third Admiral Gorshkov-class frigate, will become the Russian navy’s first carrier of Tsirkon missiles. The missile is expected to make its way to many of Russia’s latest and most advanced vessels, including the Piotr Velikiy and Admiral Nakhimov battlecruisers, the Buyan-class corvettes, and their Karakurt-class successor, and the new Yasen-M nuclear-powered cruise missile submarines.

Putin announced at a conference earlier in November that the first Tsirkon missiles will be delivered to the Russian navy sometime in 2022.