Russia is Returning a Battlecruiser to Service. But Should We Care? 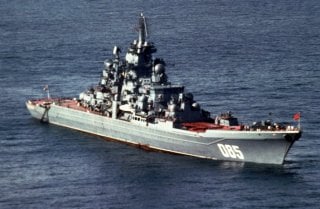 Here's What You Need To Remember: The Admiral Nakhimov could improve Russia's standing; it would assist it with power projection, at a fraction of the cost of a new ship. But the battlecruiser's retrofitting does not seem to be indicative of any larger trend.

Robert Farley, a frequent contributor to the National Interest, is author of The Battleship Book. He serves as a senior lecturer at the Patterson School of Diplomacy and International Commerce at the University of Kentucky. His work includes military doctrine, national security and maritime affairs. He blogs at Lawyers, Guns and Money, Information Dissemination and the Diplomat. This article first appeared in October 2020.