Russia Has a Hypersonic Missile - And It's Showing It Off 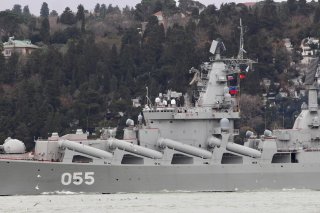 Here's What You Need To Remember: The missile can travel at Mach 8. That should scare NATO's war planners.

The Russian Navy conducted a third test-firing of its Tsirkon (Zircon) hypersonic cruise missile this month. The Russian Ministry of Defence reported that the missile was fired from the Project 22350 frigate Admiral of the Soviet Union Fleet Gorshkov. The missile was launched from a location in the White Sea and successfully hit a coastal target located on the Kanin Peninsula in the Nenets Autonomous Okrug region in northern Russia.

This follows last month’s successful test-launch of the platform, when the same frigate launched another Tsirkon missile, which struck a target 450 km away in the Barents Sea and achieved a speed in excess of Mach 4.

The ministry reported that according to objective control data, the cruise missile successfully hit a coastal target located at a distance of over 350 km in this month’s test, while the rocket flight speed was more than Mach 8.

“The Project 22350 lead frigate Admiral of the Fleet of the Soviet Union Gorshkov test-fired a Tsirkon hypersonic cruise missile from the White Sea against a target at the Chizha proving ground in the Arkhangelsk Region,” Tass reported.

This was the third such test firing of the Tsirkon hypersonic cruise missile from the frigate Admiral of the Soviet Union Fleet Gorshkov, and it follows the previous tests in November as well as a prior test conducted in early October. All shootings were considered successful, and the Defence Ministry also reported that forces of the Northern Fleet’s White Sea Naval Base at Belomorsk ensured that the testing area was closed to maritime traffic.

Following the first test in October, Russia had announced it would carry out three more test-launches by year’s end. All three tests—including the November and December launches—would “involve real strike at sea or land targets, including those imitating aircraft carriers or strategic facilities of a notional enemy,” Tass previously reported. Russia’s Defence Ministry did not specify if the recent tests did in fact simulate such targets.

A roughly twenty-second video of the Tsirkon test launch from November was released and it has been posted to YouTube.

The Tsirkon’s latest round of testing is another episode in the ongoing cycle of military buildup between Russia and the North Atlantic Treaty Organization. Development of the 3M22 Tsirkon was revealed in 2011, with a period of active testing beginning from 2015. The winged, anti-ship hypersonic cruise missile has an effective range of around 500 km, and is compatible with submarines, certain bomber aircraft, and a wide range of surface vessels.

The earliest trials of the Tsirkon were conducted from coastal platforms and that reportedly included Tu-22M3 bombers. Subsequent launches have been conducted from surface vessels, and all three of the recent tests were from the Admiral Gorshkov, the lead ship of a class of fifteen modernized Russian guided-missile frigates that entered service in the mid-2000s. The Project 22350 frigates were developed as multifunctional warships that are capable of effectively fighting surface, air and underwater adversaries, as well as striking land and coastal targets at a distance of over 1,500 kilometers.