Russia May Not End Up Building Many T-14 Armata Tanks 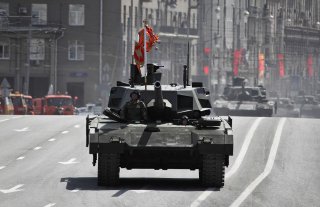 Here's What You Need To Remember: The T-14 is reported to offer up to STANAG 4569 Level 5 protection. The front hemisphere of the tank has reactive armor while the rear is fitted with bar armor that provides additional protections from anti-tank weapons such as an RPG.

Peter Suciu is a Michigan-based freelance writer who has contributed to more than four dozen magazines, newspapers, and website. He is the author of several books on military headgear, including A Gallery of Military Headdress, which is available on Amazon.com. This article first appeared earlier this year.