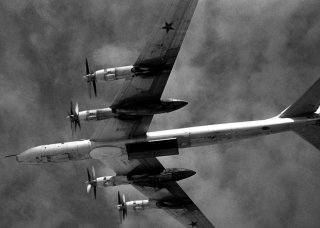 Here’s What You Need to Remember: The PAK-DA is expected to enter serial production in 2027. Although specific production and delivery timelines remain elusive, Moscow’s parallel effort to procure as many as fifty modernized Tu-160M2 bombers through 2030 suggests that the PAK-DA is still a ways off from entering service in large numbers.

Russia’s defense industry has provided fresh details on the status of its mysterious next-generation bomber project.

An industry insider told TASS News on Sunday that a prototype of the PAK-DA strategic bomber is under construction. “Currently, the experimental model is being built. The demonstration model will be ready by 2023,” the source said. The insider added that the PAK-DA will be “armed with hypersonic weapons,” and that “its flight will be aided by drones.”

The Tupolev PAK-DA is Russia’s upcoming sixth-generation stealth strategic bomber, slated to eventually replace the country’s aging Tu-95MC and Tu-160 bombers.  Whereas Russia’s current bomber fleet is based on incremental upgrades of Soviet-era aircraft, the PAK-DA is reportedly being developed on the basis of a new, flying-wing airframe design.

Defense sources told Russian state news in late 2020 that the PAK-DA’s design has been finalized and that the manufacturer is close to completing the first prototype engine. The sources added that the United Aircraft Corporation (UAC) has already begun work on the first PAK-DA prototype, with two more experimental models in production. Defense industry insiders later told state news outlet RIA that the bomber will be able to penetrate the outer layers of the North Atlantic Treaty Organization’s anti-air defenses without being detected, with the contours and shape of the airframe being specifically designed to minimize radar signatures. The sources added, without elaborating, that the PAK-DA will be able to launch long-distance standoff missiles outside of the effective engagement ranges of NATO’s air defense systems.

The Summer of 2021 brought another spurt of PAK-DA news, with subcontractor NPP Zvezda telling reporters at the 2021 MAKS Airshow that the bomber’s ejection seats are under development and will be handed off to the manufacturer within the next two years. NPP Zvezda’s announcement appears to line up with the 2023 timeline for the first PAK-DA prototype that was reported by TASS.

The PAK-DA is a subsonic bomber that—much like its U.S. B-21 Raider and Chinese H-20 counterparts—prioritizes stealth performance and payload capacity over raw speed and aerodynamic prowess. The idea behind these types of next-generation stealth bombers is straightforward: they are meant to penetrate enemy airspace undetected, placing themselves in a position to unleash their devastating payload against critical infrastructure and assets. The extent to which they can succeed in this goal, as well as how the Russian, American, and Chinese iterations of this next-generation bomber concept compare with another, remains to be determined.

The bomber will carry both conventional and nuclear weapons and is believed to boast a payload capacity of twenty-five to thirty tons and an operational range of twelve thousand kilometers, though the latter two figures are unconfirmed and may change as the bomber inches closer to serial production. The TASS source confirmed widespread speculation that the PAK-DA will carry air-launched hypersonic weapons, which are believed to include derivatives of the Kh-47M2 Kinzhal ballistic missile.

The PAK-DA is expected to enter serial production in 2027. Although specific production and delivery timelines remain elusive, Moscow’s parallel effort to procure as many as fifty modernized Tu-160M2 bombers through 2030 suggests that the PAK-DA is still a ways off from entering service in large numbers.