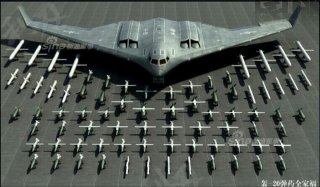 The latest edition of Modern Weaponry—a magazine published by Chinese state-owned defense giant Norinco—contains four computer-generated images of the upcoming Xian H-20 bomber. The pictures confirm the bomber’s internal weapons bay, flying wing design, and dark grey radar-absorbent coating, according to the South China Morning Post. These are the first renderings of the H-20 bomber to be published by a semi-official source. Although the images don’t tell anyone anything that they didn’t already suspect based on prior leaks and a brief promotional clip, they do confirm some of the core concepts informing the H-20 bomber’s design.

As with its U.S. B-21 Raider and Russian PAK-DA counterparts, China’s next-generation bomber will prioritize stealth performance and deep penetration capabilities over raw speed and maneuverability. The latest details reaffirm that the H-20 bomber is not being developed as a technical successor to China’s workhorse Xian H-6, itself a license-built variant of the Soviet Tu-16 heavy bomber. Rather, the H-20 bomber is set to drastically expand China’s threat projection capabilities against its U.S. adversary. The new bomber “will be able to strike targets a long distance away, perhaps in the second island chain and beyond,” military expert Jon Grevatt explained to the South China Morning Post. “That means it would threaten U.S. assets and interests in the Asia-Pacific. If the aircraft becomes operational, it has the potential to be a game-changer,” he added.

The second island chain commonly refers to the space between Japan and Micronesia. In Chinese military doctrine, the waters and territories off China’s east coast are divided into three interlinked regions, or “chains”—Beijing’s island chain concept is adapted from U.S. Cold War-era strategic thinking. The H-20 can threaten U.S. assets operating in the second chain, notably including the American military bases in Guam, in ways that China’s People’s Liberation Army Air Force (PLAAF) previously could not. Even more alarmingly for Washington, the H-20 bomber would place Beijing within striking distance of the third island chain that starts roughly at the Aleutian Islands and extends beyond Hawaii.

The H-20 bomber’s specifications remain under wraps, though current industry insider speculation points to a payload of around twenty to forty-five tons and an operational range of 8,500 to 12,500 kilometers. The bomber is all but guaranteed to fly at subsonic speeds and is widely believed to carry as many as four next-generation hypersonic cruise missiles, but the full extent of its arsenal remains unclear. Earlier estimates speculated that the H-20 bomber may be powered by the Russian NK-321 engine, but more recent reporting points to an upgraded variant of China’s domestically produced WS-10 engine as a likelier possibility.

In keeping with the PLAAF’s focus on investing in next-generation toolkits, the H-20 bomber will likely boast extensive electronic countermeasures features and information processing capabilities similar to the F-35 fighter jet’s sensor fusion.

The H-20 bomber is expected to enter mass production into the mid-2020s, with the PLAAF reportedly to begin accepting the first serial units by the turn of the decade.