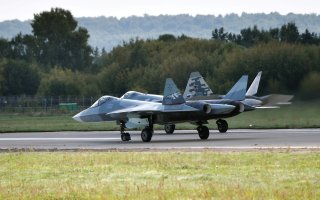 Here's What You Need to Know: Russia could be eyeing a potentially more affordable yet advanced single-engine aircraft.

The Russian military has continued to explore autonomous capabilities with its T-14 “Armata” main battle tank (MBT), and has deployed its Uran-9 robotic combat vehicle to Syria for testing—but now the skies could quite literally be the limit for what Moscow envisions for its next-generation unmanned platform. This week Rostec announced it was now developing a concept for an advanced single-engine light- and medium-class piloted and unmanned combat plane.

The Russian state-owned high-tech conglomerate’s CEO Sergei Chemezov said that such an aircraft could be developed in cooperation with foreign partners to help expedite the efforts.

“Indeed, work is underway to develop a combat aviation system of the future in its light and medium classes,” Chemezov told Tass on Monday.

“Under the design, this may be a universal platform in the manned and unmanned versions,” the Rostec chief added, while responding to a question about the plans to create a light single-engine fifth-generation fighter for Russia’s Aerospace Force. “The company is working on the concept and the operational requirements for such a platform. We are doing this on our own initiative so far, without [federal] budget funds.”

The project is still in its infancy, and Russia’s Defense Ministry has not placed any orders for this work so far, so it isn’t clear how much money is even being invested in the development of this optionally-manned fifth-generation fighter.

However, Rostec’s CEO has faith that the fighter could be developed with cooperation from foreign partners, as that could ensure that there is a market beyond Russia. Chemezov added, “This is an interesting theme from the viewpoint of promoting such a plane for exports.”

Moreover, given that such a fighter would be developed and manufactured using Rostec’s funds, the company would have the option to offer it for exports on its own.

“Especially, if this is a joint development with some state,” suggested Chemezov. “However, the (Russian) Defense Ministry may purchase it for its own needs as well. Naturally, the plane will have to be upgraded to the level required by the Defense Ministry for its interior, if a decision is made.”

Moscow has already invested heavily in the Sukhoi Su-57, which is a product of the PAK FA’s fifth-generation fighter program and the first Russian military aircraft to utilize stealth technology. It entered serial production this fall.

Additionally, Russian Industry and Trade Minister Denis Manturov announced in 2017 that Russia was planning to develop a fifth-generation light fighter in cooperation with other countries. Tass reported, that as Head of the United Aircraft Corporation (UAC) Yuri Slyusar specified at the time, Russia would be represented in the project by the UAC as the parent organization and also by the Sukhoi Company that has developments on the fifth-generation fighter and the MiG Aircraft Corporation that has developments on single-engine planes.

UEC-Klimov Company Executive Director Alexander Vatagin had also previously specified that Russia had the potential to restart the production of inexpensive single-engine fighter jets, which would feature an engine that could be based on the current RD-33 engine.

This is a hard turn for Russia’s Air Force Command, which had made the decision in the early 1990s to give up the production of single-engine combat planes. At that time, the Russian Air Force operated MiG-23, MiG-27 and Su-17M aircraft of various modifications. Now it seems that in addition to the twin-engine multirole fifth-generation Su-57 jet, Russia could be eyeing a potentially more affordable yet advanced single-engine aircraft as well.