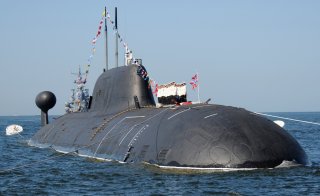 Here's What You Need to Remember: Despite its age, it seems the Akula-class is still a potent (and quiet) force to be reckoned with.

American-laid hydrophones littered the ocean floor. They were arranged in arrays, bridging the GIUK Gap chokepoint, the area of ocean in the North Atlantic between Greenland and the United Kingdom with Iceland in the middle.

They were designed in arrays that would pick up the movements of the hundreds of Soviet submarines and surface ships stationed on or around the Kola Peninsula, heading out into the Atlantic via the GIUK Gap.

Soviet submarine designs, while relatively capable, generally lagged behind the more refined NATO designs. Soviet subs were fast, could dive fairly deeply, and carried quite an array of weaponry — but were not very quiet, a crucial defect for platforms that were intended to be silent and untraceable. This played to NATO’s advantage — until one day it didn’t.

In the early 1980s, the Soviet Union had a stroke of luck and was able to import a crucial piece of Japanese technology that made their Akula-class submarines quieter.

The second noise factor is the noise caused by a submarine’s propeller blades cutting through the wake caused by bumps or appendages on the sub’s hull — things like the rudder or other control surfaces, or by the conning tower.

With the right propeller design, the noise caused by cavitation can be reduced, with less of a speed sacrifice. This has resulted in a variety of odd-looking blade designs that are optimized for underwater silence.

In 1985, the Soviet Union launched the Akula-class. Small and fast, the Akula-class (meaning “Shark” in Russian) was a nuclear-powered attack submarine, intended to hunt other submarines or surface ships. It was able to pass through the GIUK Gap virtually undetected and shifted the balance of power in favor of the Soviet Union.

In an odd series of circumstances, the Japanese manufacturing giant Toshiba, in partnership with a Norwegian firm, exported high-tech multi-axis propeller milling machines to the Soviet Union. These milling machines allowed for a very high degree of milling control and rectified Soviet propeller issues that had plagued their designs for years.

''For a long time the Soviets didn't seem to give a damn about the noise radiated by their submarines,'' said Ira Dyer, an acoustics expert, and professor of ocean engineering at the Massachusetts Institute of Technology in an interview with The New York Times.

But with the Akula-class’s newly designed high-tech propellers, the Soviet Union had something frighteningly quiet.

The collapse of the Soviet Union greatly reduced the capabilities throughout the Russian armed forces, and long-range submarine patrols were no exception. However, in 2009, two Akula-class submarines patrolled along the eastern seaboard for several weeks.

Another Akula-class submarine went undetected in the Gulf of Mexico for several weeks in 2012, prompting outrage and a demand for answers from the Senate Armed Services Committee.

Despite its age, it seems the Akula-class is still a potent (and quiet) force to be reckoned with.