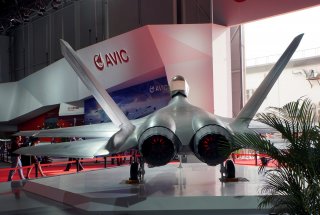 Here's What You Need to Remember: At least two potential Checkmate clients—India and Vietnam—are embroiled in active territorial disputes with Beijing, but the FC-31 could be well-positioned to compete with the new Russian fighter for the rapidly expanding African market.

It’s no secret that Russian defense giant Rostec’s new, lightweight fifth-generation Checkmate fighter is primarily an export product, aggressively priced to compete with western offerings like the Dassault Rafale and JAS-39 Gripen. It is just as well established that Russia’s defense industry is targeting India as one of the plane’s first, and largest, potential customers. Rostec’s early July Checkmate teaser trailer prominently featured India, with Deputy Prime Minister Yuri Borisov reiterating on the day of the plane’s reveal that “firstly, the aircraft will be oriented toward African countries, India, and Vietnam.”

A recent South China Morning Post article voiced the concerns of some Chinese defense observers over India’s potential Checkmate procurement. “The sales of stealth fighters are very political and still largely based on the political divide,” said Song Zhongping, a Chinese military expert and commentator, adding that India is among the most likely buyers of Rostec’s new fighter. The context to which Zhongping is referring is the ongoing border standoff between Chinese and Indian forces in the Himalayas. Chinese experts have argued that India's fourth-generation fighter fleet, headlined by a recent Rafale procurement, cannot match the capabilities of Beijing’s J-20 fifth-generation fighter. Against the looming backdrop of possible future clashes with China, the Indian Air Force has set forth a mission requirement for a next-generation fighter jet capable of going toe to toe with the rapidly modernizing Chinese People’s Liberation Army Air Force.

There were reports earlier this year suggesting that India indicated its interest in purchasing Lockheed Martin’s F-35 fifth-generation stealth fighter, but those prospective talks do not appear to have taken off. In the 2010s, India became a partner in the FGFA program to jointly develop an export variant of Russia's fifth-generation Su-57 fighter. New Delhi left the program in 2018, with top Indian officials reportedly citing concerns over the fighter's stealth performance and avionics. Checkmate is Russia's latest—and arguably most formidable—attempt to bring India back on board as a customer. Nevertheless, Russia's marketing blitz could be complicated by news that India is in the midst of developing two indigenous fighters of its own: the improved Tejas Mark 2 and next-generation Advanced Medium Combat Aircraft.

New Delhi, for its part, continues to play its procurement cards close to its vest. To date, there is no concrete indication that India has committed to purchasing Checkmate.

Even as Checkmate could wind up battling Chinese forces on the battlefield, it may also find itself competing with Chinese fighters in the global arms market. China's upcoming FC-31 stealth multirole fighter jet appears to broadly share the Checkmate's mission purpose. It is also being developed as an export product, though its projected price and the full extent of its capabilities remain unknown. At least two potential Checkmate clients—India and Vietnam—are embroiled in active territorial disputes with Beijing, but the FC-31 could be well-positioned to compete with the new Russian fighter for the rapidly expanding African market.