Russia's "Drel" Cluster Bomb is a Guided Missile on a Budget 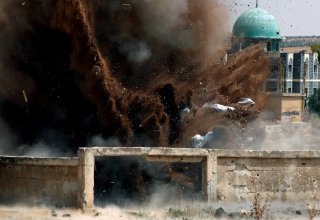 Here's What You Need To Remember: The bombing method envisioned by Drel is currently being put to the test in Syria, where "low-intensity" fighting has continued for years. It is likely that Russia will lend some of the bombs to Assad, to see what the effects will be.

Russia’s cluster glide bomb, the the PBK-500U Drel, has undergone its latest round of testing in early 2018 and is on the verge of deployment readiness.

Deputy CEO of the Tekhmash Concern Alexander Kochkin told a Russian military publication that “testing is proceeding according to plan. The product is behaving as expected, so we have no reservations about the successful conclusion of the tests.”

The Drel—Russian for “Drill”—project was prominently displayed at Russia’s “Army 2017” weapons show, and Tekhmash states that the first Drel bombs will be operational by the end of this year.

The PBK-500U is a stealth cluster glide bomb equipped with infrared countermeasure technology, meaning that it should be impervious to interception by infrared homing missiles. Also present in the PBK-500U are electronic counter-countermeasures in the form of anti-jamming technology, crucial to supporting its built-in GLONASS satellite tracking system.

Drel reportedly has a range of over 30 km and weighs over 500 kg. The current iteration of the bomb contains fifteen SPBE-K (self-guided anti-tank element) charges weighing around 15 kg each, which should place them just below the 20 kg submunition limit of the 2008 Convention of Cluster Munitions.  As its munition name suggests and as military insider Dmitry Kornev told Russian news outlet Gazeta, the “PPBK-500U Drel is an anti-tank system. It is designed to engage specific vehicles.”

But Russia already has a burgeoning catalogue of air-to-surface missiles up to and including the nuclear-capable Kh-47M2 Kinzhal, announced by Vladimir Putin in March 2018 and tested several times thereafter. What unique role, then, does Drel fulfill in the Russian arsenal? None in particular, but experts claim that it’s extremely cost-effective. As editor of the Russian publication “Weapon Exports” told Gazeta, “the whole question comes down to cost. A gliding bomb that uses satellite GPS data is tens or even thousands of times cheaper than guided air-to-surface missiles. It ensures high accuracy at long ranges. But most importantly, the price of this aerial bomb allows it to be used in en masse.”

Frolov notes the absurdity of trying to hit something like a $15,000 Jeep with an $500,000 air-to-surface missile, arguing that the Drel bomb is a much more cost-effective solution in low intensity conflicts. In keeping with its budget nature, the PBK-500U can be mounted on a wide range of Russian mid-range aircraft including the Tu-22M bomber and the Su-24. It is also compatible with the Su-57, but this may not be an ideal use-case considering the Su-57’s comparatively steep deployment cost and the kinds of high-profile operations that Russia’s flagship fifth-generation fighter is designed for.

Although Drel employs stealth technology, the Russian air force does not intend to use it for strategic bombings against well-entrenched enemy zones where air superiority cannot be guaranteed. According to military expert Dmitry Kornev, the ideal use-case for Drel is rather against moving tank formations: “this bomb is great to use against enemies on the march. This is because mobile surface-to-air missile systems have a much smaller effective radius. The only requirement is to ensure coordination between the bombers and reconnaissance units. This is when the reconnaissance transmits target coordinates in real time as incoming attack aircraft deploy their weapons against the marked target.”

Kornev notes that this bombing method is presently employed in Syria, where the scattered anti-Assad forces constitute the kind of “low-intensity” target that the PBK-500U is made for. Drel was originally slated for 2016; Kornev suspects that the PBK-500U was delayed precisely so that it could be tested in Syria before heading into its final production phase.

Mark Episkopos is a frequent contributor to The National Interest and serves as research assistant at the Center for the National Interest. Mark is also a PhD student in History at American University. This article originally appeared in 2018.