Russia's Heavy Weapons are Getting a new UAV-based targeting System 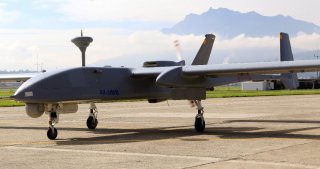 Here's What You Need to Remember: As part of the joint operation between the drone and the gun, the Orlan-10E transmitted coordinates to the command vehicle, which then calculated data to fire and sent the coordinates to the self-propelled howitzer's crew, the press office further specified.

The purpose of the Russian-built Orlan-10E reconnaissance drone is to aid in the targeting of the Msta-S howitzer, but earlier this week the unmanned aerial vehicle (UAV) took to the skies not just to help artillery crews in their aiming but actually to be seen by potential foreign buyers.

Uralvagonzavod, which is part of the high-tech state conglomerate Rostec, conducted a demonstration of a Msta-S, upgraded for the NATO 155mm shell, as it was linked and integrated with the UAV at the Staratel proving ground in Nizhny Tagil in the Urals.

"The combat capabilities of a 155mm 2S19M1-155 upgraded self-propelled howitzer operating as part of an artillerysystem were demonstrated to a foreign customer," the press office of the Rostec Armament Cluster told Tass, but didn't specify the customer.

"The gun fired to a maximum range of 40 km with automatic gun-laying," the press office added. "Besides, the Msta-S demonstrated an excellent result of its inter-operability with a command vehicle and an Orlan-10E drone."

As part of the joint operation between the drone and the gun, the Orlan-10E transmitted coordinates to the command vehicle, which then calculated data to fire and sent the coordinates to the self-propelled howitzer's crew, the press office further specified.

The Orlan-10E is the export version of the domestically used Orlan-10, which has been actively used by Russian Ground Forces in Syria. It was deployed for reconnaissance but also for collecting aerial imagery and even for 3D mapping in support of humanitarian convoys and search and rescue (S&R) operations in the region. At least one Orlan-10 has been shot down by Syrian rebels. Ukrainian officials have also reported to have shot down the UAV.

It is powered by an internal combustion gasoline engine and is launched from a folding catapult. The unarmed UAV, which uses a parachute recovery for landing, has a maximum flight duration of sixteen hours and can reach speeds of upwards of 150 km/h and a range of 140 km.

The Orlan-10 UAV platform consists of the actual unmanned aerial vehicles along with launch and recovery systems, ground control segment, and swappable payloads. It features a modular design with a high-wing configuration, while its tail section comprises a tailplane and a vertical stabilizer. The UAV has multiple camera systems including a day-light camera, thermal imaging camera, a video camera, and a radio transmitter located in the gyro-stabilized pod fitted under the fuselage. These provide an "eye in the sky" that offers real-time intelligence, 3D maps, surveillance, and aerial reconnaissance of ground-based targets. Production of the Orlan-10 began in 2010.

Russia conducted tests with the Orlan-10 last June in the Kemerovo Region in southwestern Siberia, where it was used by motor rifle large unit of the Central Military District's 41st all-arms army. The UAV aided the troops in delivering precision artillery strikes on targets during the drills. The Orlan-10 teams accomplished more than twenty fire assignments during the Siberian drills, which involved over 500 personnel and more than fifty items of military hardware.