Russia's MiG-31 Foxhound Has It's Eyes on Just One Prize 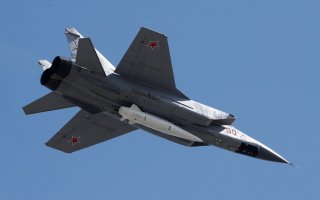 Here's What You Need to Remember: The Mikoyan MiG-31 was developed during the Cold War era as a home-defense interceptor. Codenamed "Foxhound" by NATO, the long-range, two-seat supersonic aircraft has maintained a certain mystique in the west, in part because there remains much speculation over all of its capabilities. It took its maiden flight in September 1975 and was designed to work efficiently in all weather conditions.

In early February, the Russian Central Military District conducted an exercise against a notional intruder and while such exercises aren't that unexpected, this drew attention as it involved a Mig-31BM, a supersonic high-altitude interceptor-fighter. The pilots reportedly performed around 30 sorties in the drills, which were conducted near the Ural Mountains and involved practicing measures on their own to detect, track, forced to land, and notionally eliminate airspace intruders.

"The pilots visually detected an aircraft and locked it on," the Central Military District's press office told Tass. "The crews of MiG-31BM interceptor-fighters acted in pairs, forcing the intruder to climb to ultimate altitudes."

The Mikoyan MiG-31 was developed during the Cold War era as a home-defense interceptor. Codenamed "Foxhound" by NATO, the long-range, two-seat supersonic aircraft has maintained a certain mystique in the west, in part because there remains much speculation over all of its capabilities. It took its maiden flight in September 1975 and was designed to work efficiently in all weather conditions.

While Syria had reportedly ordered eight of the MiG-31E aircraft in 2007 the order was suspended due to Israeli pressure along with a lack of Syrian funds. Turkish news media has reported that six of the aircraft may have been delivered for use by the Syrian Arab Air Force, but Russia has denied that it actually sold the aircraft to Syria.

During the late Cold War, a MiG-31 Foxhound may have been used to chase after the U.S. military's SR-71 Blackbird spy plane and reportedly locked on with its missiles, but as the American reconnaissance aircraft was never employed to actually overfly Soviet airspace, whether the incidence occurred has remained a matter of conjecture at best.

More recently it has been reported that the Russian military had upgraded the MiG-31 Foxhound and has explored the option of arming the home-defense interceptor with hypersonic missiles, which would make the airframe a very serious threat. Despite the fact that the aircraft dates back to the 1970s, Russia has an established trend of preserving original aircraft designs by integrating modern weapons and avionics and this has resulted in the MiG-31BM upgrade from a decade ago. The upgrades provided network-centric combat control, as well as phased array radar.

The upgraded MiG-31BM can also employ R-33 long-range air-to-air missiles and R-73 short-range air-launched weapons. It is powered by two D-30F6 engines, which provide a take-off thrust of 15,500 kgf each, and the fighter-interceptor has a maximum speed of 3,000 km/h and a ceiling of 20,600 meters. It is also outfitted with a mid-air refueling system.

It is unknown how many of the original MiG-31s have been upgraded to the 31BM standard but it has been reported that it is less than 100 of the original 500 aircraft produced during the Soviet era.