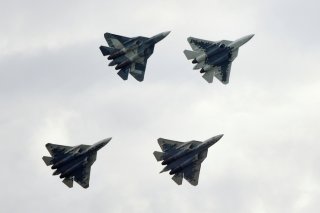 Here's What You Need to Remember: Potential foreign buyers include Algeria and India, but also notably Turkey, which could adopt the plane given that it was expelled by the United States from the Lockheed Martin F-35 Lightning II Joint Strike Fighter program for its purchase of the Russian-built S-400 anti-aircraft defense system.

The Russian-built Sukoi Su-57 could soon be operating over foreign skies as the latest reports suggest international customers have expressed interest in the fifth-generation combat aircraft. The Russian Federal Service for Military-Technical Cooperation has reportedly received a number of requests from foreign customers for the Su-57E—the export version of the multirole fighter aircraft that is currently entering service with the Russian Air Force.

The aircraft was developed for air superiority and attack operations and can take on all types of air, ground, and naval targets. The single-seat, twin-engine fighter jet is also the first Russian aircraft to feature stealth technology, including the broad use of composite materials and aerodynamic configuration, which ensures a low level of radar and infrared signature. The Su-57 is also capable of developing supersonic cruising speed.

A total of seventy-six Su-57 fighters are on track to be supplied to the Russian military by 2028, with twenty-two of those aircraft arriving by 2024. Moscow has made it clear that Russia is to be first in line for the advanced aircraft, but at the same time Sukhoi has been lining up foreign sales and doing its part to ensure the fighter is being seen on the world stage.

The export Su-57E variant was being demonstrated at the IDEX-2021 International Armament Exhibition in Abu Dhabi this February —the largest trade show to go forward this year despite the global novel coronavirus pandemic. However, despite bringing the jet to the Middle East, the United Arab Emirates and other Gulf countries weren’t among those expressing interest at this point.

“Requests were received concerning the Su-57E aircraft, although there are no Middle East countries among them,” the Russian Federal Service for Military Technical Cooperation’s press service told Tass. “Nevertheless, foreign customers of this region show interest in this airplane as well.”

Potential foreign operators include Algeria and India, but also notably Turkey, which could adopt the plane given that it was expelled by the United States from the Lockheed Martin F-35 Lightning II Joint Strike Fighter program for its purchase of the Russian-built S-400 anti-aircraft defense system.

Even if customers are lined up, it isn’t clear when potential buyers could actually take delivery of their shiny new planes. It was only late last year that Russia received its first serial-produced Su-57 fighter with the first-stage engine. Additionally, the first Su-57s with the advanced second-stage engine would be assembled in 2022.

The top priority is to supply the Su-57 aircraft to the Russian Defense Ministry before foreign orders would be sold.

“However, we are ready to start deliberation of this topic in case of interest of our foreign partners,” the press office added.

It could be a clever marketing tactic—one similar to in-demand consumer products. Some customers may simply want it more because it isn’t actually available in the large numbers to meet the demand. It has also been suggested that the aircraft’s cost has been an issue, and future orders by foreign partners could offset the costs that Moscow will have to pay for its Su-57s.

This article previously appeared earlier and is being reprinted due to reader interest.