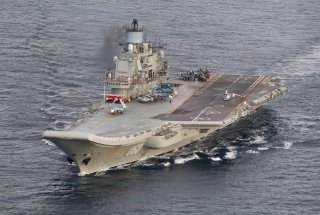 Here's What You Need To Remember: Russian president Vladimir Putin reportedly studied the new carrier designs in early January 2020. But while a new flattop is on the Russian navy’s wish list, the multi-billion-dollar cost of building a carrier -- to say nothing of the additional cost of the air wing and operations -- could give Putin and Kremlin officials pause.

But the cost could scuttle the replacement plan before it really gets underway.

The 60,000-tons-displacement Kuznetsov commissioned in 1990. Problems plagued the ship from the beginning. One of the carrier’s major weaknesses is her lack of catapults for launching her fighters. Another is her powerplant. The vessel is powered by steam turbines and turbo-pressurized boilers that Defense Industry Daily generously described as “defective.”

By spring 2019 a plan reportedly was in place to assemble a new dry-dock that in theory could accommodate the carrier. The No. 35 Ship Repair Plant in Murmansk in northern Russia has two, adjacent 600-feet-long drydocks that yard workers could combine in order to fit Kuznetsov.

Then on Dec. 12, 2019, disaster struck when diesel fuel ignited on one of Kuznetsov’s lower decks, Russian media reported. The carrier at the time was pierside in Murmansk for pre-planned repairs following the disastrous 2016 deployment to the Syrian coast.

The blaze spread to cover 6,500 square feet as firefighters struggled to contain it. One person died and 10 were injured in the fire, TASS reported. Six landed in intensive care.

Damage from the fire complicates the repair plan. Now Kremling planners must weigh Kuznetsov’s value as a symbol of national prestige against her poor condition and the safety risk she poses to workers and crew.

Russian shipbuilders have proposed two designs that in theory could replace Kuznetsov, according to The Barents Observer. The Nevskoye Design Bureau in St. Petersberg pitched Lamantin, a 90,000-tons-displacement carrier that would be able to embark as many as 60 aircraft, roughly double what Kuznetsov can handle

A scale model of Lamantin was on display at a St. Petersburg military exhibition in 2019.

The alternative is Shtorm, a larger design from the Krylov State Center that can embark up to 90 aircraft, making it roughly as capacious as a U.S. Navy supercarrier.

Russian president Vladimir Putin reportedly studied the new carrier designs in early January 2020. But while a new flattop is on the Russian navy’s wish list, the multi-billion-dollar cost of building a carrier -- to say nothing of the additional cost of the air wing and operations -- could give Putin and Kremlin officials pause.

“Needed development and construction costs might exceed the capabilities of the country’s military budget,” The Barents Observer explained.

David Axe serves as Defense Editor of the National Interest. He is the author of the graphic novels  War Fix, War Is Boring and Machete Squad. This article first appeared in January 2020.