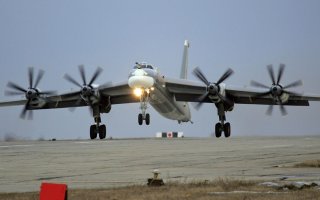 Here's What You Need to Know: This nuclear bomber has been in service for a while.

Despite the fact that the Tu-95 “Bear” is one of the oldest designs in active service with the Russian Air Force, much like the American B-52 Stratofortress, it shows no signs of landing into retirement any time soon. This week the Russia’s strategic nuclear forces received the latest version of heavily upgraded bombers.

Last month a pair of the Tupolev Tu-95MS bombers performed a scheduled flight over the neutral waters of the Sea of Japan and the north-western Pacific. That particular flight lasted over eight hours and highlighted the ability of the early Cold War bombers to travel extreme distances. During the November flight, the missile-carrying bombers were also escorted by Su-35S fighters of the Russian Aerospace Force.

The four-engine propeller plane was developed in the 1950s after Soviet planners had requested a four-engine bomber that could fly five thousand miles and hit targets across the United States. The choice of propeller-driven engines was made due to the fact that jet engines of the time burned through fuel too quickly. In addition to being the oldest designs with the Russian military, the Bear is also the only propeller-powered bomber in service in the world today.

The Tu-95MSM modernization added significant capability to the Tu-95, including those far beyond its original role of dropping unguided bombs. The main purpose of the Tu-95MS variant was to integrate new air-to-surface missiles—which isn’t entirely a new concept. In fact, the Soviet Union experimented with air-to-surface missiles on Tu-95s starting in the 1950s, with the Tu-95K. This continued throughout the Cold War, culminating in the Tu-95MS series in 1981. The Tu-95MS series was a deep modernization of earlier versions of the Tu-95, replacing a myriad of equipment: everything from the defensive guns to radars.

Unlike the United States Air Force’s B-52s, many of the Tu-95s aren’t actually that old. This was due to fact that the older Tu-95 airframes were not suitable for modernization, and as a result the production lines for the Tu-95 were actually restarted in the 1980s to produce the new Tu-95MS variants. Many of the currently flying Bears today are relatively young compared to some North Atlantic Treaty Organization aircraft.

Since its development the Tu-95 has been a key element of the air component of Russia’s nuclear triad, and the modernized versions have been upgraded to carry the latest X-101 cruise missiles. Those missiles can be retargeted once the bombers are already airborne.

The highly modernized Tu-95MS’s primary armament is the Kh-55 air-launched subsonic cruise missile (ALCM), which has a range of around 2500 km. The regular Tu-95MS was designed to carry these six of these internally in a KMU-6-5 rotary launcher.

The Russian military has continued to keep the Tu-95 updated and upgraded, and last summer a Tu-95MSM bomber made its debut flight at an aerodrome of the Beriev Aircraft Plant in Taganrog. According to Russian media, the systems and equipment performed as expected and the entire test flight was conducted without a hitch.