Russia's Yak-130 Jet is Old, but It Has All the Weapons To Smash any Army 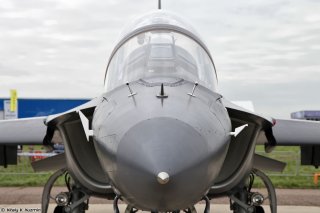 Here's What You Need to Remember: The Yak-130 is a versatile and formidable trainer aircraft that manages to punch above its weight, extending into carrier-based, reconnaissance, and even strike roles.

As with many of the military projects that survived the Soviet collapse, the Yak-130 has a tortured and winding development history. In the 1980s, the Soviet government launched a procurement competition to phase out its aging fleet of Czech Aero L-29 and L-39 trainers. Of the five manufacturers that initially submitted their designs, only the Mikoyan MiG-AT and Yakovlev Yak-UTS remained by 1991. Yakovlev finalized its concept demonstrator’s design in 1993, but the project stalled from a lack of funding in the aftermath of the Soviet collapse. To save its UTS project in the absence of government funding, Yakovlev turned to an unorthodox solution: shopping for foreign investors. A deal was struck with Italian aircraft manufacturer Aermacchi and, with money and materiel flowing again, the Yak-130D concept demonstrator finally made its maiden flight from the Gromov airfield in 1996.

A slew of administrative differences led Yakovlev and Aermacchi to part ways several years later. The latter developed its own derivative fighter, the M-346 Master, which is still in service in several countries including Italy, Israel, and Poland. Yakovlev went on to win the original 1980’s bid, and a finalized Yak-130 entered serial production to become the new trainer jet of the Russian air force.

The serial Yak-130 is a two-seat, light training jet, boasting a standard swept-wing design, hinged canopies, and light-weight alloy construction. With a shorter fuselage and less aggressively rounded nose than the Yak-130D, the Yak-130 is designed to maintain stable flight at angles of attack up to 35 degrees. An impressive thrust/weight ratio of .7 enables a high rate of climb (RoC) and opens the possibility of take-off in suboptimal conditions.

Unlike many of the other fighters to emerge from the late Soviet era, the Yak-130 offers a robust avionics package that includes a fly-by-wire system, helmet-mounted display technology, dual GPS/GLONASS compatibility for advanced navigation and targeting, and a reprogramming module to modify handling and stability characteristics within certain parameters. This being a trainer plane, the fighter comes loaded with combat simulation modes. With this potent blend of sound aerodynamic design principles and onboard electronics, the Yak-130 is able to trade performance blows with 4th and 4+ generation fighters like the MiG-29 and western counterparts like Boeing's F/A-18E-F Super Hornet.

Despite being designed and produced as a dedicated trainer fighter, Yakovlev branded the Yak-130 as a versatile light-attack plane that is capable of fulfilling strike roles and operating from aircraft carriers. A suggested ground-attack Yak-130 variant even made the shortlist to become Russia’s new close air support (CAS) fighter but was later dropped in favor of an advanced Su-25 derivative.

The Yak-130’s versatility and cost-effectiveness made it an export hit across the post-Soviet sphere and developing world, with dozens of orders being placed by Myanmar, Belarus, Algeria, and Bangladesh.

It was revealed late last year at the 2019 Dubai Air Show that Russia’s United Aircraft Corporation (UAC) is working on a Yak-130 modernization package to turn it “largely into a combat aircraft” that can still double as a trainer jet.