Su-25 Grach: This Russian Fighter Is the Ultimate Warrior 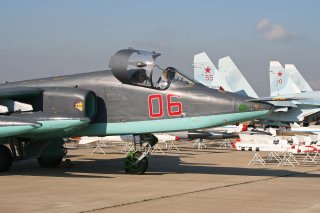 Image/Wikipedia: This aircraft had just been reworked by the 121AOP at Kubinka and had not yet been returned to Air Force service. As part of the rework, it received the latest dark grey color scheme. c/n 25508110393. On static display at the Russian Air Force 100th Anniversary Airshow. Zhukovsky, Russia.

Why Russia's Sukhoi Su-33 Fighter Was a Failure