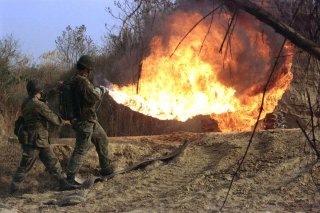 Despite these issues, the U.S. Department of Defense clearly saw some potential advantages that the flamethrower offered and created various man-portable and vehicle-mounted incendiary weapons. This included the M-202 Flame Assault Shoulder Weapon (FLASH), which was a rocket-based system that could hit a target five times further away than the older World War II era devices.

Perhaps ironically, while automatic weapons including machine guns, as well as short barreled rifles/shotguns and other destructive devices, now all fall under the National Firearms Act of 1934, flamethrowers do not. Various commercial versions that can still shoot fire up to fifty feet are completely legal in 48 states; only Maryland bans them outright, while California considers them “destructive devices,” but does issue permits for restricted use such on movies.