The Scary War Game Over Taiwan That the U.S. Loses to China Again and Again 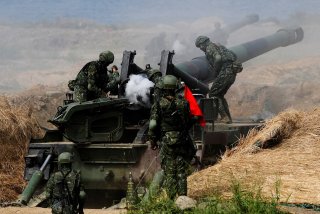 Around a large table with a map and icons representing ships, submarines, planes, missile batteries, land-based forces, space-based sensors, and other apparatuses of modern warfare, officials from the Pentagon and the Rand Corp. fight a thus far unimaginable conflict.

The Red Team, composed of experts on the Chinese military, aims to use all available forces to capture Taiwan, the island 90 miles off the coast that China regards as a renegade province and that it has repeatedly vowed to retake, by force if necessary.

It doesn't generally go well for the Blue Team.

“It's had its ass handed to it for years,” David A. Ochmanek, a former deputy assistant secretary of defense for force development and now a defense analyst at Rand, told RealClearInvestigations. “For years the Blue Team has been in shock because they didn't realize how badly off they were in a confrontation with China.”

War game simulations are not the real world, of course, where an array of economic, diplomatic and cultural considerations inform a country's military decisions and actions. And few experts on China seem to think that the country will actually go to war over Taiwan anytime soon.

But as the U.S. seeks a closer alliance with Taiwan – illustrated by the visit of Health and Human Services Secretary Alex Azar there last week, the highest-level official U.S. delegation to the island in 40 years – the possibility of war between the two superpowers may be more than theoretical: A bill now before both houses of Congress, the Taiwan Defense Act, would end the long-held American policy of “strategic ambiguity” – which aims to keep China guessing as to the U.S. response to any attempt to take Taiwan by force – and require the U.S. “to delay, degrade, and ultimately defeat” an attempt by China “to use military force to seize control of Taiwan.”

The proposed legislation reflects strong bipartisan support for Taiwan in Congress. But it's hard to predict. whether public opinion, already tired of long American wars in Asia, would support the faraway island, where the U.S. maintains has no U.S. military presence now although it maintains forces in the region. Nonetheless, if passed the measure would be far more than a tough talk statement of belief – it would impose serious legal obligations that would demand action. This adds an urgency to the questions officials are now asking: What would happen if China launched an all-out military effort to seize Taiwan? Does the United States possess the wherewithal to meet the obligations of the Taiwan Defense Act?

These questions are hotly debated among military specialists and within the Pentagon, but at a time of national preoccupations over COVID-19 and the looming presidential election, they have received scant notice in the mainstream press. And yet, given the rise of tensions with China, they are perhaps among the most important facing the country.

Taiwan became a separate entity from Mainland China in 1949, when the defeated Nationalist forces retreated to the island, 90 miles off China's southeast coast, and set up a rival government. Over the years, even as every major country has officially recognized Beijing as the rightful government of all of China, Taiwan has become a full-fledged democracy, with public opinion there overwhelmingly opposed to any formula that would reattach the island to the mainland and its authoritarian ways.

Despite China’s often warlike rhetoric and its continuous efforts to isolate Taiwan diplomatically – not allowing it, for example, to participate in World Health Organization meetings even during the coronavirus pandemic – most analysts think it does not want to use military force against Taiwan.

In the short term China seems to be hoping that the Trump administration's hard line is more a matter of electoral politics than a permanent American position. U.S. intelligence has also concluded that Beijing hopes Trump loses in November to former Vice President Joe Biden (who faces criticism over his son Hunter's lucrative deals in China.)

Still, China’s tense relations, not just with the U.S. but many Western nations, are not rooted in electoral politics. There is a more general alarm over aggressive Chinese policies, including the mass detention of Uighurs; its claims in the South China Sea; its crackdown on Hong Kong's traditional freedoms; its cyberattacks against other governments; and fears that it is using high-tech products it exports to spy on citizens of other countries.  China shows no sign of moderating its policies, especially in areas that it regards as its “core interests,” and no core interest is more important to it than establishing its sovereignty over Taiwan.

As China faces more criticism, there's no question that achieving what Beijing calls the “reunification of the motherland” would be a crowning glory for the Chinese Communist Party and its authoritarian leader, Xi Jinping. Senior Chinese officials continually issue warnings that they are ready to use force if other means of achieving reunification fail, and that is the reason for China's massive military buildup, which, as the Pentagon’s war games show, has created a new and unprecedented challenges for the United States.

As several military analysts put it, the days of unfettered American military superiority in the Western Pacific are over. China has, the analysts say, achieved what's called anti-access area denial, or A2/AD, which would prevent American forces from being able to penetrate anywhere near Taiwan once a war there started.

Given this capability, China, with its 2-million-strong military, might directly attack Taiwan, with a standing force of 220,000, hoping that the U.S. would stay out of the conflict. But the U.S. would have powerful reasons for not allowing that to happen. Aside from the destruction of a friendly democracy, a Chinese seizure of Taiwan would enormously expand China's power and position in Asia, especially if combined with its absorption of the entire South China Sea into its maritime territory.  This would be a major step forward for China, now clearly a strategic revival and an enemy of democracy, in its goal of replacing the U.S. as the dominant power in all of Asia.

If China felt that the U.S. would intervene, military planners from the Pentagon and Rand who have gamed out scenarios believe a war over Taiwan would most likely begin with a massive attack by advanced Chinese missiles against three American targets: its bases on Okinawa and Guam, its ships in the Western Pacific, including aircraft carrier groups, and its air force squadrons in the region.

Military analysts predict the American side would initially counter with Patriot anti-missile missiles. But the sheer number of Chinese missiles would mean that hundreds of them would reach their targets. American submarines operating near Taiwan would be able to sink some Chinese ships, including amphibious landing craft bringing the Chinese invading force to Taiwan. But the number of submarines near enough to the battle zones at the time of the Chinese strike would, analysts say, be around 20 or 25, each armed with about 12 torpedoes and 10 or so Harpoon missiles, not nearly enough to overcome China's flood-the-zone strategy. Military analysts seem to agree that in the first day or two, there would likely be thousands of American deaths and the loss of billions of dollars’ worth of materiel.

“We're playing an away game against China,” Rand’s Ochmanek said. “When bases are subjected to repeated attacks, it makes it exponentially more difficult to project power far away.”

“The casualties that the Chinese could inflict on us could be staggering,” said Timothy Heath, a senior international defense researcher at Rand and formerly a China analyst at the U.S. Pacific Command headquarters in Hawaii. “Anti-ship cruise missiles could knock out U.S. carriers and warships; surface-to-air missiles could destroy our fighters and bombers.”

China would have its own challenges. At the same time as it worked to keep the U.S. out of the battle zone it would have to address the trickier and riskier part of the operation: getting an invasion force, consisting of tens of thousands of troops, across the 90 miles separating Taiwan from the Mainland.

“They are giving off a lot of signals about how this campaign would unfold,” Lyle J. Goldstein, a China and Russia specialist at the Naval War College in Rhode Island, told RCI. “They're talking a lot about airborne assault in two varieties, by parachute and by helicopters. It's what's called vertical envelopment. Amphibious assault is old school. It may be necessary but it's not the main military effort.  The new school is to bring lead elements over by air, secure the terrain and then bring in more forces over the beach. The intensity and scale of training in the Chinese military now for airborne assault is, to me, shocking.

“There would be 15, maybe 20 different landings on the island, east, west, north, and south, all at once, some frogmen, some purely airborne troops,” Goldstein continued, saying he was expressing his own views, not official assessments of the U.S. “The Chinese high command would watch these bridgeheads to see which of them is working, while the Taiwan command is looking at this amid decapitation attempts and massive rocket and air assaults. The Chinese would seize several beachheads and airports.  Their engineering prowess would come into play in deploying specialized floating dock apparatuses to ensure a steady flow of supplies and reinforcements—a key element. My appraisal is that Taiwan would fold in a week or two.”