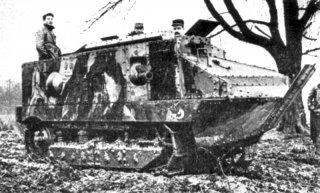 Here's What You Need To Remember: Nonetheless, the Schneider CA1 was a significant improvement compared to previous French designs that were incredibly slow and ungainly. Other designs proved to be more capable, thanks to lessons drawn from the Schneider.

The strange tank’s armament was irregularly placed. A single 75 millimeter cannon was on the Schneider’s right forward corner and had only a limited traverse. Its location inside the tank necessitated a very compact design, which resulted in a very short barrel. The short barrel length had an adverse effect on both projectile velocity and accuracy.

Though significantly more capable than preceding tank designs, the Schneider CA1 had several design flaws that hindered usefulness. Externally carried fuel tanks were prone to catching fire when hit. Moreover, in order to increase range, additional fuel was sometime carried inside and was very likely to explode if enemy artillery penetrated the Schneider’s armor.