This Ship Started the Russian Revolution 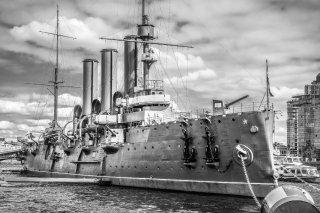 Here's What You Need to Remember: During World War I, the vessel patrolled the Baltic and took part in short bombardment operations. She successfully survived engagements with enemy warships as well as hydroplanes. Aurora was in port in October of 1917 when the Bolsheviks raided the Winter Palace and overthrew the Provisional Government.

It may not have been the proverbial shot heard around the world, but when the Russian protected cruiser Aurora opened fire on October 24, 1917, it started the assault on the Winter Palace in Petrograd and officially began the October Revolution.

It was just one moment in a most colorful career for the warship that was launched in 1900 and is today preserved as a museum ship in St. Petersburg.

Aurora was the third and final Pallada-class protected cruiser built for the Imperial Russian Navy. On the personal orders of Czar Nicholas II, the warship was named after the Roman goddess of the dawn.

Designed in the 1890s as a new class of fast warship to operate as commerce raiders, the Pallada-class was light but still was considered a significant improvement over previous Russian cruiser designs. However, due to the long construction time, and the fact that great strides were being made in naval warship design, the new warships were seen as largely obsolete by their entry into service.

Despite numerous shortcomings, Aurora proved to be a lucky if not entirely capable surface combatant.

Soon after her completion, Aurora was sent to reinforce the Russian Pacific Fleet but was delayed due to mechanical failures. On the way to the Far East, the Russian Squadron including Aurora mistook English fishing trawlers for Japanese torpedo boats and opened fire—and soon after Russian vessels began firing on one another. The ship was damaged and an Orthodox priest onboard was gravely injured.

It was not a good omen for what was to come.

After reaching the Far East, Aurora took part in the disastrous Battle of Tsushima, during which her commanding officer, Captain 1st Rank Eugene R. Yegoryev, and fourteen crewmen were killed. After the battle, Aurora became the flagship of Rear-Admiral Oskar Enkvist, and with two other Russian cruisers broke through to neutral Manila, where she was interned by United States authorities from June 6, 1905, until the end of the war.

Beginning in 1906, the protected cruiser operated in the Baltic as a cadet training ship, and during that time traveled the world to show the Russian flag. In 1911, she traveled to Bangkok as part of the celebrations in honor of the coronation of the new King of Siam.

During World War I, the vessel patrolled the Baltic and took part in short bombardment operations. She successfully survived engagements with enemy warships as well as hydroplanes.

Aurora was in port in October of 1917 when the Bolsheviks raided the Winter Palace and overthrew the Provisional Government. Despite popular misconceptions, Aurora didn't actually bombard the palace but rather fired a blank shot that was the signal for the assault to begin.

After the revolution, Aurora returned to service as a training ship—and in 1927 was awarded the Order of the Red Banner for her revolutionary merits. During World War II, her guns were taken off the ship and used in the land defense of Leningrad (formerly Petrograd).

She was repeatedly shelled and bombed and sank in the harbor at the end of September 1941. Raised and repaired, the ship became the first campus and training vessel of the Nakhimov Naval School. After extensive repairs were made she was preserved as a monument to the Great October Socialist Revolution and was transformed into a museum ship in 1957.

Aurora was awarded the Order of the October Revolution in 1986, which was notable in that the medal features the ship on its face.

During a restoration in the 1980s, a new welded hull was built according to the original drawings. It was also determined that some of the original armor plates had been made in the UK in the 1890s, a fact not previously known.

The ship remains the oldest commissioned warship in the modern Russian Navy, and now flies the naval ensign under which she was commissioned. Aurora is manned by an active service crew under the command of a 1st Rank captain.