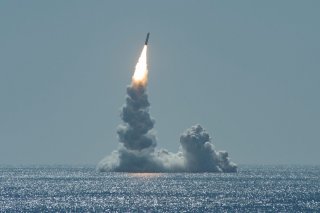 Here's What You Need to Remember: “If you have a sea launched nuclear cruise missile, it can change an enemy’s thought process. If they escalate, but know we have something in kind, they have to ask themselves ‘do we really want to do that’?”

Would arming U.S. Navy submarines with a low-yield, nuclear missile lower the threshold to a potential nuclear weapons conflict, making it more likely? Some say yes, others say no. The debate still rages.

The 2018 Nuclear Posture Review calls for the addition of such a weapon, which senior Pentagon leaders say is now taking steps forward in its development. The thinking with the new weapon, to be joined by a low-yield variant of the Trident II D5 which has already been built, would offer a tactical nuclear weapon option to commanders. The theory is that a smaller nuclear weapon would be a way to reinforce, strengthen and fortify a deterrent posture, thereby actually reducing the prospect of an actual nuclear encounter. Several years ago, former Defense Secretary Jim Mattis said part of the rationale for the new weapon was to bring Russia back to the negotiating table, following its violation of the Intermediate Range Forces (INF) Treaty and its construction of tactical nuclear weapons.

Advocates for the weapon, such as Vice Adm. Johnny Wolfe, Director of the U.S. Navy’s Strategic Systems Program, say no. He argues that nuclear cruise missiles would conversely greatly strengthen deterrence. Wolfe further elaborated upon this thinking by referring to Russia’s well known “escalate to de-escalate” posture, saying Russia’s use of this kind of approach would be to threaten the use of a tactical nuclear weapon to “back us down.”

“If you have a sea launched nuclear cruise missile, it can change an enemy’s thought process. If they escalate, but know we have something in kind, they have to ask themselves ‘do we really want to do that’? This puts the threshold right where it needs to be so nobody thinks using nuclear weapons can provide any advantage,” Wolfe told The Mitchell Institute for Aerospace Studies.