Silent Killers: Sweden's Stealth Submarines Are About to Get Even Quieter 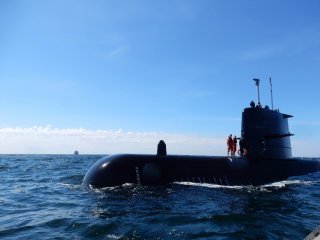 Here's What You Need to Remember: During training, the Gotland was able to pierce Carrier Strike Group 7’s defenses and even managed to take a photo of the USS Ronald Regan off the coast of San Diego. This qualified as a sinking. Due in part to the Gotland’s success, the initial one-year lease was extended for a second year.

The Gotland-class of submarines is the pride of the Swedish Navy. They’re really quiet—and are getting even quieter.

AIP systems supply the sub’s motor with electricity, without having to use stored electrical power in the batteries, and therefore allow non-nuclear submarines to run for longer without having to surface. Without an AIP system, diesel-electric submarines need to surface for access to the atmosphere, which onboard diesel generators require in order to charge the submarine’s batteries.

The Gotland class is undergoing some modifications that will make it even quieter. Both the HMS Gotland and the HMS Upland recently underwent modification. According to a Swedish armed forces statement, the modifications to the Gotland-class include “a new ship surveillance system, a new combat and fire management system, diving locks and more modern Stirling engines.”

During training, the Gotland was able to pierce Carrier Strike Group 7’s defenses and even managed to take a photo of the USS Ronald Regan off the coast of San Diego. This qualified as a sinking. Due in part to the Gotland’s success, the initial one-year lease was extended for a second year.