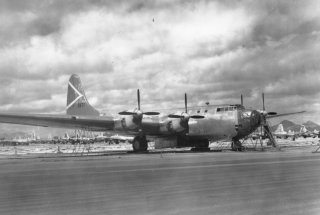 Here's What You Need to Remember: By the time the first prototype was built it was apparent the XB-19 was already obsolete given the quick advancements that occurred during the war. While it was the largest bomber of the era, it simply wasn't the most advanced and by the time it finally took flight the XB-35 and XB-36 bombers were already being developed.

What was the largest American bomber built during World War II? Most would answer the B-29 Superfortress, the four-engine heavy bomber designed by Boeing and which was used to carry the atomic bombs that ended the war. However, that answer isn't technically the correct one.

It is a trick question.

An even bigger bomber, the Douglas XB-19, was developed and a single prototype was built. While it was flown a handful of times during test flights beginning in June 1941, it never entered active service. The experimental aircraft had a wingspan of 212 feet, while it was 132 feet in length – dwarfing every other World War II aircraft with the exception of the Hughes H-4 Hercules (Spruce Goose). The XB-19 displaced 130,230 pounds and had a maximum take-off weight of 164,000 pounds.

The four-engine bomber was advanced when it was developed in the late 1930s and it began as a top-secret, top priority project. However, due to inconsistent funding, the production of the prototype dragged on for more than three years.

Yet even when it was completed the all-metal prototype was different from other bombers as it featured an unfinished silver metal skin, heavily-glazed nose section and stepped cockpit flight deck. Its fuselage was a smooth, teardrop-shaped design that featured a deep belly for the internal bomb bay, and it tapered exceedingly at the rear. The aircraft was among the first bombers to feature a tricycle landing gear as opposed to the "tail-dragger" design that was incorporated on many of the bombers of the era.

It was intended to hold up to 11,000 gallons of fuel that would allow it to remain in the air for up to 24 hours at a time. As a result, it was equipped with bunks and even a galley kitchen.

By the time the first prototype was built it was apparent the XB-19 was already obsolete given the quick advancements that occurred during the war. While it was the largest bomber of the era, it simply wasn't the most advanced and by the time it finally took flight the XB-35 and XB-36 bombers were already being developed.

In 1943 the aircraft's Wright R-3350 engines were replaced with Allison V-3420-11 V engines and efforts were made to turn the XB-19 into a transport aircraft. However, the modifications were never completed and the XB-19 made its final flight in August 1946.

After the war, there were efforts to preserve the sole prototype, but those proved futile as there was nowhere to properly display the airframe as the National Museum of the United States Air Force hadn't been constructed at that point. As a result in 1949, the aircraft was scrapped.

Today only two of its enormous main tires remain on display – one is at the National Museum of the U.S. Air Force while the other is at the Hill Aerospace Museum.