Soon, the Army Will Decimate Targets 1,000 Miles Away 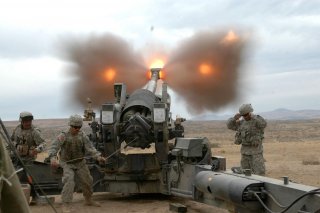 Here's What You Need to Remember: Army is increasingly working with the other services to explore new multi-domain strategies to combat attack, and one senior Army official told me a year or so ago that there is no reason a land-fired weapon can’t attack maritime targets at sea. Certainly Australian, Korean or Japanese-based 1,000 mile cannons could attack enemy ships or at least deny access to certain areas with suppressive fire.

What if the Army could destroy enemy air defenses from the ground across hundreds of miles, hitting well-defended inland areas inaccessible to even sea-launched Tomahawks able to travel 900 miles? Or what if the Army could overwhelm an approaching enemy mechanized armored force with suppressive fire from an incredible distance? All of these are new, previously impossible missions which could become real in the near future. The catch is whether the Army can successfully complete its ambitious effort to engineer a first-of-its kind 1,000 mile Long Range Cannon (LRC).

“It’s a new paradigm. A new approach of delivery effects at strategic ranges, but it is not without challenges,” Brig. Gen. John Rafferty, Director, Precision Fires Cross Functional Team, Army Futures Command, told The National Interest in an interview.

At the moment, the Army’s effort is primarily a science and technology initiative exploring the realm of the possible through collaborative efforts with the National Academies of Science and the Army Science Board. The National Academies of Science, Rafferty said, are now conducting a “feasibility examination” of the Long Range Cannon possibility.

Interestingly, the prospect of 1,000-mile artillery attack mirrors some historic uses of how artillery was thought of years ago before the advent of precision-targeting fifteen years ago. Over the years, artillery was thought of as an “area weapon” intended to blanket a target with suppressive fire to enable forces to reposition or maneuver on the battlefield. However, the advent of GPS-guided artillery with weapons such as the emergence of Excalibur shells in Iraq in 2007 reshaped this equation, introducing the tactical possibility of using 155mm artillery for pinpointed precision attack, almost like JDAMs had been able to do from the air for years prior to this.

Some even likened this phenomenon to a kind of “precision revolution” as other weapons in addition to Excalibur such as the GPS, Inertial Measurement Unit-guided Guided Multiple Launch Rocket Systems, blasted onto the war scene in Iraq and Afghanistan. Ground weapons across the entire sphere of land war became massively more precise, offering ground commanders an entirely new set of attack possibilities and Combined Arms Maneuver strategies.

While certainly something like a Long-Range Cannon would also be developed as a precision weapon, yet in addition to this, Rafferty explained, the LRC could conceivably be used as something of an “area weapon” to blanket, overwhelm and soften an enemy area for precision-guided, follow-on attacks with hypersonic weapons.

It may simply be too early to discern the timeline for successful prospects with this, however last year Rafferty told me the Army thinks it might be able to have some options by 2023 with proper funding. This kind of initiative is of particular relevance in places such as the Pacific. A cursory look at simple geography, for example, reveals that a land-fired artillery weapon with a range of 1,000-miles could travel to mainland China from some places in Korea or even Japan. For example, the distance from Kobe, Japan to Beijing is listed at 941 nautical miles.

This offers an entirely new universe of land war possibilities by enabling ground forces to attack across areas separated by water. Perhaps Navy ships were not able to transit an area to get into position to attack? Perhaps air defenses were too advanced for Air Force planes to destroy targets? In these kinds of contingencies, a ground Army could hold enemies at risk for either deterrence or offensive operations across vast and impassable swaths of ocean. Perhaps a weapon such as this could attack coastal areas to open up avenues for a follow-on amphibious landing? Not to mention, the Army is increasingly working with the other services to explore new multi-domain strategies to combat attack, and one senior Army official told me a year or so ago that there is no reason a land-fired weapon can’t attack maritime targets at sea. Certainly Australian, Korean or Japanese-based 1,000 mile cannons could attack enemy ships or at least deny access to certain areas with suppressive fire.

Certainly, something like the emergence of a weapon of this kind is, not surprisingly, aligned with Army weapons futurists and innovators taking a close look at how new weapons and technology, combined with joint networking, will change maneuver warfare into the future.