Sorry America: Germany Wants More Eurofighters (And Not the F-35) 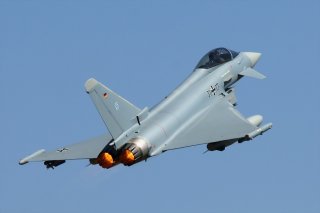 Here's What You Need to Remember: The offer was also made to deepen the existing military partnership between Berlin and Bern, and allow for greater joint training between the two air forces. The Eurofighter could provide the Swiss with full autonomy in the use, maintenance and application of the data from its aircraft. As more than 660 of the aircraft have been ordered, it is the most widely used aircraft for securing the airspace over Europe.

This month aviation giant Airbus was awarded a contract from the German government to deliver thirty-eight additional Eurofighter Typhoon aircraft to the Luftwaffe (German Air Force). With this latest contract, Germany has become the largest ordering nation in Europe for the continent’s biggest defense program—which secures more than 100,000 jobs across Europe.

Ordered under Project Quadriga, the deal is for thirty of the second-seat variants and eight additional twin-seat versions of the Eurofighter—while three of the aircraft will be equipped with additional test installations including the Instrumented Test Aircraft, for further development of the aviation platform.

“The new Tranche 4 Eurofighter is currently the most modern European-built combat aircraft with a service life well beyond 2060,” said Dirk Hoke, CEO of Airbus Defence and Space. “Its technical capabilities will allow full integration into the European Future Combat Air System FCAS.”

This renewed order from Germany will also secure production of the jets, which will be equipped with the latest technology that could allow the Eurofighter to expand its role in ground-attacks and be a true multi-role capable fighter. New equipment will include the latest upgrades to the electronic radar, and future-proof hardware and software.

These latest aircraft will replace the oldest first-generation Eurofighter jets of the German fleet—with many of those in service since 2004.

“This important decision strengthens our capabilities in the air force. By replacing Tranche 1, which is obsolete and susceptible to repairs, we are increasing the operational readiness of the Eurofighter fleet and thus our reliability in the [NATO] alliance,” Ingo Gerhartz, inspector general of the German Luftwaffe, told German international broadcaster Deutsche Welle (DW).

Germany’s parliament, the Bundestag, opted to acquire the Eurofighter over the Lockheed Martin F-35 Lightning II, which is used by other NATO nations including the UK, Italy and the Netherlands—while Poland will adopt the fifth-generation fighter in the coming years. The Berlin government’s ruling grand coalition government, along with the Free Democratic Party and the Alternative for Germany party both voted in favor of the purchase, which the Left party voted against while the Greens abstained.

The reported deal is worth at least 5.4 billion euros.

Germany's Luftwaffe may not be the only operator of the latest version of the Tranche 4 Eurofighter however. An order is also expected to come from NATO partner Spain, as Madrid seeks to replace its legacy F-18 fighters, while the procurement decisions of non-NATO partners Switzerland and Finland have been seen to be imminent with orders to be placed next year.

Airbus along with the Federal Republic of Germany officially submitted an order to the Swiss Federal Office of Armaments. That offer was prepared in cooperation with the other Eurofighter nations as well as the industrial partners including Italian-based Leonardo and the UK’s BAE Systems. It reportedly met the requirements of the new combat aircraft procurement from the government in Bern to replace the Swiss Air Force’s fleet of F-5 and F/A-18 aircraft.

The offer was also made to deepen the existing military partnership between Berlin and Bern, and allow for greater joint training between the two air forces. The Eurofighter could provide the Swiss with full autonomy in the use, maintenance and application of the data from its aircraft. As more than 660 of the aircraft have been ordered, it is the most widely used aircraft for securing the airspace over Europe.

The Eurofighter is operated by the four partner nations of Germany, the UK, Italy, and Spain and has long been undergoing continuous development.