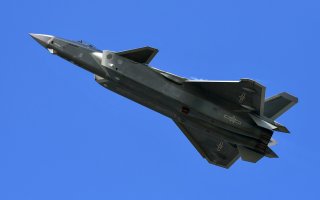 Here's What You Need to Remember: One of the main advantages is that American aircraft have cockpit displays that indicate to the pilot the various angles and ranges from which their aircraft can be detected and tracked by various enemy radars.

“When we apply fifth-generation technology, it’s no longer about a platform, it’s about a family of systems,” then Air Force chief of staff Gen. David Goldfein told reporters at the Pentagon several years ago. “It’s about a network and that’s what gives us an asymmetrical advantage, so that why when I hear about an F-35 versus a J-20, it’s almost an irrelevant question.”

While Goldfein used the Nighthawk as a comparison—he probably did not intend to suggest that the J-20’s systems are quite as basic as the 1980s-era F-117. While accurate information about the J-20 is scarce, there are indications that the Chinese aircraft is equipped with a phased array radar, a robust electronic warfare system and an electro-optical/infrared sensor that is similar in concept to the F-35’s systems. However, while it is possible that the Chinese aircraft might have decent sensors—Air Force officials have suggested that the J-20 lacks the “sensor fusion” and networking to be as effective as the F-22 or F-35.

Meanwhile, at the same press conference, Air Force secretary Deborah Lee James decried the possibility of facing another year where Congress fails to pass a budget. Even if Congress passes a full year continuing resolution (CR)—which maintains the previous year’s spending levels—it would massively disrupt the Air Force’s procurement efforts because the service would not be able to award new start program contracts. “We certainly hope that won’t be the case, we know the Congressional staffs are working very hard even while their members are back home this summer, but we are hearing that either a six-month CR or one-year CR is at least a possibility,” James said.