Stealth Fighters: The U.S. Military's Backbone in Any War with China 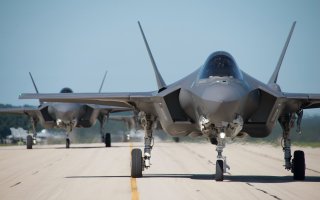 Here's What You Need to Know: There's a reason why F-35 customers keep buying more.

A major U.S. air attack in the Pacific would need to pursue thousands of “aim points” every day and sustain an ability to “penetrate” and therefore operate over a hostile territory over the period of an airwar campaign, a reality now leading many senior Air Force experts and former leaders to call for much greater numbers of stealthy attack aircraft.

It is a call for more 5th Gen attack platforms, something many argue presents an urgent need given the reasonably small number of 186 F-22s and a small but growing fleet of F-35s. There is, however, an abundance of aging 4th-Generation aircraft, which many feel is simply insufficient to handle a modern threat environment filled with fast-emerging new operational demands.

“We need more penetrating aircraft that can revisit targets. You can’t avoid the threat by using stand-off. You need to be able to handle the target demand in major regional conflicts,” Ret. Lt. Gen. David Deptula, Dean of the Mitchell Institute for Aerospace Studies, told The National Interest in an interview.

Certainly, non-stealthy 4th-Gen aircraft are not in a position to be “penetrating,” given the technological sophistication and advancements of both Russian and Chinese air defenses. When it comes to achieving air-to-air and air-to-ground superiority, speed, stealth, and 5th-Gen sensing will be necessary.

Deptula, a former F-15 pilot and Air Force 3- star general, was the principal air campaign planner for flew combat operations in Operation Desert Storm, and a joint task force commander for no-fly zone operations over Iraq where he flew hundreds of combat hours, and later the director of air operations in the opening attacks against al Qaeda and the Taliban in response to the 9/11 attacks was instrumental in planning and executing Operation Iraqi Freedom. His view, one shared by many at the Pentagon, is that modern, high-risk air attacks in contested or extremely well-defended areas armed with either Chinese HQ-9s or Russian S-400s will require a large volume of continued “penetrating” strikes.

“Desert Storm consisted of approximately 40,000 aimpoints. We averaged over 1,200 aim Points strike sorties a day. If you look at any kind of South China Sea or Eastern European scenario you are one could be looking at 100,000 aim points,” Deptula said.

The point here is that in a vast, expansive great power conflict, tens of thousands of known aimpoints will need to be attacked and many others will quickly emerge to require even more “penetrating” attacks, a scenario which many contend quite simply that 4th-Gen aircraft will be ill-equipped to handle. For sure, stand-off weapons and surface-to-surface one-way missiles cannot be afforded in anywhere near the quantities required to be operationally significant in this kind of scenario.

An additional reality is that both Russia and China possess a growing fleet of 5th-Gen aircraft, such as the Russian Su-57 and Chinese J-31. While new computing, advanced sensors and long-range weaponry built into 4th-Gen aircraft may close the gap to some extent, it does not appear at all likely that upgraded 4th-Gen aircraft would perform well against these rival platforms.

Perhaps this is part of the reason why new countries continue to ask for F-35s, existing F-35 customers seek to buy more and the U.S. Air Force has already flown some kind of 6th-Gen aircraft.