Stimulus Checks For One Group Of Very Speical Americans Are Coming 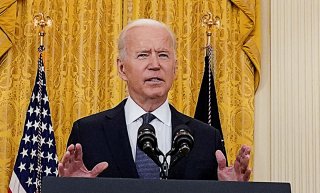 Here's What You Need to Remember: The $1.8 billion received by the Cherokee Nation was a smaller portion – roughly 10 percent – of Biden’s total $20 billion relief fund for Native American tribal nations. The funding is associated with the State and Local Fiscal Recovery Fund, which aims to provide pandemic relief at the local level.

The largest portion of this, and the one which has generated the most anticipation and news coverage, is the $1400 stimulus check, sent out to all Americans making under $75,000 per year. Roughly 160 million of these checks, 90 percent of the total, have been sent so far; they have been credited with keeping millions of Americans out of poverty, though they have also been slammed by some commentators as wasteful and unnecessary.

One detail in the plan that has largely escaped the notice of commentators has been a $20 billion commitment to funding Native American tribal communities. Unusually, these payments have not taken the form of programs or direct stimulus payments; instead, the Biden administration has simply passed the funds onto Native American tribal governments, obliging them to use the funds how they see fit.

This has led the Cherokee nation – the second largest Native American tribal government, after the Navajo – to pass a local stimulus measure of its own. On Thursday, May 27, Cherokee Nation Principal Chief Chuck Hoskin signed into law an additional round of stimulus payments to all Cherokee citizens. The measure would pay out a total of $2000 in stimulus payments to every Cherokee, divided into two $1000 payments over two years. The measure is slated to benefit roughly four hundred thousand Cherokee citizens, living across the United States but concentrated in Oklahoma. The Cherokee Nation’s tribal council approved the measure by a 16-1 vote earlier in May.

The American Rescue Plan contained $1.8 billion in direct federal aid to the Cherokee. Its use was left up to the discretion of Hoskin and the tribal council. In a statement, Hoskin announced that the stimulus payment would constitute 43% of the Cherokee’s allocated federal funds. He further stated that part of the remaining funds would go towards mental health and wellness programs.

Cherokee can claim the funds via the use of the upcoming “Gadugi Portal,” which is open to registrations although not fully online. The site is scheduled to be fully ready by June, in time for the first stimulus payment to be made.

The $1.8 billion received by the Cherokee Nation was a smaller portion – roughly 10 percent – of Biden’s total $20 billion relief fund for Native American tribal nations. The funding is associated with the State and Local Fiscal Recovery Fund, which aims to provide pandemic relief at the local level.