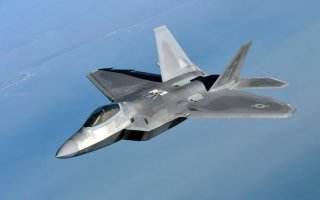 Here's What You Need to Know: America's experience with the F-22 program sheds light upon current F-35 debates and deliberations.

When the F-22 burst onto the scene in the early 2000s, it was heralded as a new generation of air-dominance, speed, thrust, maneuverability, and stealth.

It was widely reported to be the most capable air-to-air platform ever to exist and is actually still regarded as such by many. The original plan was for the Air Force and the Pentagon to acquire as many as 750 F-22s, but there are now 186 operational F-22s. What happened? As there have been numerous calls over the years to restart the F-22 production line and growing combatant command demand for the aircraft, given its performance in combat and wargames.

Ultimately the F-22 production line was not restarted for largely budgetary reasons, despite growing calls for more of them, according to Air Force leaders at the time. Perhaps this was in part based upon the rationale that a 6th-Gen aircraft might emerge? Yet at the time of the ongoing discussions regarding a possible F-22 restart, digital engineering prototyping methods and other now current innovations did not exist, so decision-makers would likely not have been able to anticipate that a 6th-Gen fighter would take to the sky as fast as it has.

This question, while of course front and center several years ago amid calls to restart F-22 production, is now again extremely relevant in an interesting way, as cited in Congress by the top Republican on the Senate Armed Services Committee Sen. Jim Inhofe (R-Okla.). Inhofe referenced the F-22 experience with a specific mind to the light it sheds upon current F-35 debates and deliberations.

Citing cost concerns and other criticisms, some in Congress have been calling for F-35 production and acquisition to be scaled back. It is in this context that Inhofe recalled the F-22 experience.

“I can remember we had the F-22. We talked about the fact that it's a fifth-generation fighter. We started out, we're going to have 700, and we ended up getting to 200. I remember that very well, and that criticism that I had at that time, and we've had the same problems. And yet, now we know it's a different game now because our competition has fifth-generation fighters,” Inhofe said, according to a transcript of the proceeding, while questioning the nominee for Commander of the U.S. Indo-Pacific Command Admiral John Acquilino.

While clearly critical of the F-22 decision years ago, Inhofe made the argument that keeping and building upon the F-35 fleet, particularly in the current threat environment in the Pacific where China is known to increasingly be operating its own 5th-Gen aircraft.

“The Chinese Communist Party has generated some capabilities in the region that are designed to keep us out. Some refer to those as A2/AD, and when we talk about them, we talk about operating in contested space. Fifth-generation airplanes and beyond are required to be able to generate a lethal force and posture in a place where it's needed to generate the deterrence,” Acquilino said in response to questioning from Inhofe.

Getting to the bottom line, Inhofe flatly asked Acquilino about whether decreasing F-35s might endanger U.S. and allied forces in the Pacific.

“I would be concerned if we lessened our capacity of fifth-generation airplanes. I think they're needed to win,” Aquilino responded.