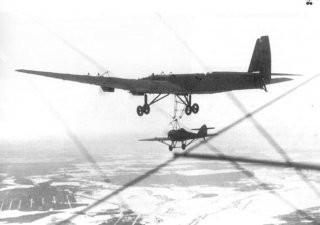 Here's What You Need to Remember: Umbilical fuel lines would allow the fighters to draw from their mothership’s much larger fuel supply, greatly extending range.

Since their debut of aerial warfare, air arms have struggled to find ways to extend the range of small, agile fighter aircraft optimized for speed and maneuverability rather than fuel capacity. In modern times, airliner-sized in-flight refueling tankers are a favored, though expensive, solution.

But before inflight refueling began to be widely adopted in the 1950s, no one found quite as creative a solution to this problem as Vladimir Vakhmistrov, who tested nine different Sveno mothership bombers designed to carry ‘parasite’ fighters on their wings and fuselage.

Remarkably, not only did the unwieldy-seeming contraptions of “Vakhmistrov’s Circus” prove air worthy, but the Sveno-SPB production model demonstrated surprising effectiveness during its brief combat career early in World War II.

In June 1931, Vakhmistrov, a test-pilot Vladimir of the VVS’s (Soviet Air Force’s) Scientific Test Institute, proposed that Soviet fighters could be usefully mounted on heavy bombers.

While the United Kingdom and U.S. Navy had tested docking “parasite” airplanes onto zeppelin-like airships, Vakhmistrov project was the first to mate one airplane to another.

By December 1931, Vakhmistrov had cobbled together Zveno-1: a twin-engine TB-1 heavy bomber mounting two all-metal I-4 biplane fighters on top of its high-fuselage mounted wings. As the I-4s were launched once the Zveno-1 was airborne, Vakhmistrov had their shorter lower-wings (which added lift at a cost of drag) removed without any reported performance issues. The initial flight on December 3 proceeded promisingly, despite one of the fighters separating from its mothership prematurely.

Three years later, the Zveno-2 was ready based on the more capable four-engine TB-3 bomber—this time carrying two newer I-5 fighters on its broad wings, (rolled on via a ramp) and a third on its back. However, the center I-5 had to be lifted manually. This proved so time-consuming that it was rarely launched and largely retained as an additional, manned engine for TB-3—sometimes even with its wings and tail removed!

The Zveno-3 introduced a more convenient configuration: two Grigorovich I-Z monoplanes fighters carried under the TB-3’s wings. The I-Zs had fixed landing gear that rolled along the ground during takeoff, and were distinguished by their bizarre armament of two single-shot 76-millimeter Kurchveski recoilless guns and just one regular 7.62 millimeter machine gun.

Coordinating takeoffs runs proved challenging, however. Zveno-3 suffered the program’s only deadly accident when one of the I-Z’s crashed upward into the TB-3 while attempting to disengage during takeoff. As described in this first-hand account, the TB-3’s pilot attempted an emergency landing, but the I-Z abruptly fully detached, killing its pilot.

Vakhmistrov tried a different approach with the Zveno-5, which had a trapeze under its fuselage that allowed an I-Z fighter to latch onto it mid-flight in order to extend their range. This tricky maneuver was the first aerial docking between fixed-wing aircraft.

This concept was revisited in November 1939 with the Zveno-7, which could “dock” two I-16 Ishak (“Donkey”) monoplanes using two belly-deployed trapezes—but the maneuver remain excessively difficult.

By then, however, the I-16’s retractable landing gear had made under-wing mounting far more practical. The compact, 1.6-ton I-16s were nimble and fast for their time, with speeds approaching three hundred miles per hour. In August 1935, the Zveno-6 carrying two underwing I-16s, made its first flight.

Vakhmistrov’s craziest endeavor was the Aviamatka—a TB-3 converted to carry five fighters: two underwing I-16s, two I-5 biplanes on top of the wings, and a lone I-Z dangling from a belly-mounted trapeze. Yes, the outlandish-seeming beast could actually fly. The Aviamatka was conceived as a sort of flying patrol carrier; Vakhmistrov envisioned up to eight I-16s taking turns refueling on her, collectively embarking on six-hour-long air defense patrols.

But by the end of the 1930s, Vakhmistrov began pursuing a different concept. He had read combat reports on how agile, single-engine Stuka dive bombers proved capable of relatively precise attacks targeting point targets like ships, tanks and bridges. However, only larger two- or four-engine bombers designed for less accurate level bombing had the range to attack distant targets.

This led to the Zveno-SPB production variant which first flew in July 1937, combining a TB-3-4AM-34FRN bomber with more powerful 900 horsepower engines and two I-16 Type 24 fighters, each carrying two 250-kilo bombs. The TB-3’s wing-mounted fuel tanks kept the Ishak’s topped up, resulting in a maximum range of 1,550 miles. While linked together, the 24-ton trio could fly up to 165 miles per hour up to altitudes of 22,000 feet high.

The Navy and VVS each originally planned to order twenty Sveno-SPBs and forty I-16s. Vakhmistrov even sketched plans to convert Pe-8 bombers and Catalina or MTB-2 flying boats into motherships.

However, both services grew skeptical of the project. In the end Moscow Aircraft Factor 207 delivered only six Sveno-SPBs and twelve I-16 Type 24 fighters to the Black Sea Fleet. These were deployed in 1940 to the 2nd Special Squadron of the 32nd Fighter Regiment, based at Yevpatoria on the Crimean Peninsula. The unusual unit came to be known as “Shubikov’s Circus” after its commander Captain Arseniy Shubikov, a combat veteran of the Spanish Civil War.

One June 22, 1941, Nazi Germany began its devastating invasion of the Soviet Union. As German and allied Romanian forces advanced towards the Crimean Peninsula, the 2nd Squadron was tapped to launch raids against strategic targets in Romania, across the Black Sea.

On July 26, two Sveno-SPBs took off carrying four bomb-laden I-16s between them. Twenty-five miles from the Romanian coast near the city of Constanta, they released the fighters.

I-16 pilot Boris Litvinchuk described the launch procedure in The Angry Sky of Tauris by fellow combat pilot Vasily Minakov.

The light that flashed above my visor said, “Attention!”

I signal to Gavrilov in the same manner. “There, attention!”

A signal flashed on the shield under the bomber. It said, “Release!”

I nod to Shubikov, jerk to turn the rear lock release knob. I feel the plane attain freedom of motion on one axis. To achieve a complete release, I smoothly slide the fighter’s nose down. Suddenly, my fighter is entirely free of the mothership.

As expected, the enemy took the fighters for their own: where could Soviet fighters have come from? Shubikov and Litvinchuk precisely dived down upon the oil depot, with Filimonov and Samartsev on their port side. Only when their bombs flared up below, did the enemy anti-aircraft guns open fire wildly—too late! Nimble as hawks they pulled out from their steep dives at low altitude and slipped back across the sea.

From the nearest airfield, a pair of Messerschmitts flew towards them in pursuit. But here, Shubikov and Litvinchuk were in their native element. After a storm of impressive maneuvers, they rushed in for a head-on pass. Their stunned enemies turned away in a panic . . .

All four I-16s then landed in Odessa for refueling before returning to Yevpatoria. After a decade in development, the Zveno concept had been successfully tested in combat.

Soon, however, Shubikov’s Circus would be called on to hit a much more vital target—and this time, Axis forces would be expecting them.

The fate of Shubikov’s Circus and the Sveno program is detailed in a companion article.

Sébastien Roblin holds a master’s degree in conflict resolution from Georgetown University and served as a university instructor for the Peace Corps in China. He has also worked in education, editing, and refugee resettlement in France and the United States. He currently writes on security and military history for War Is Boring. This article first appeared last year and is being republished due to reader interest.