Study This Ugly Stealth Fighter: The X-32 Nearly Was the F-35 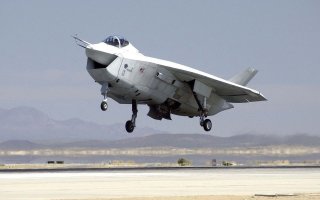 Here's What You Need to Remember: From rampant budget concerns to the implicit technical challenges of implementing cutting-edge technologies like sensor fusion, it’s highly likely that Boeing would have encountered broadly similar problems as to those that have plagued the F-35 program for the past decade.

Over a decade after its introduction, the F-35 stealth fighter jet is among the most recognizable symbols of American airpower. And yet, the emergence of the F-35 as a technological standard bearer for the U.S. Air Force was anything but inevitable.

Here is the F-32 that could have been.

In 1993, the U.S. government launched the Common Affordable Lightweight Fighter project (CALF) to phase out a slew of older fighters— including the F-15 and F-16— and provide a cost-effective development platform for the next generation of U.S. fighter aircraft. CALF was rolled into the Joint Strike Fighter Program (JSF) in the following year, and the bidding phase ensued. Emerging as the front runners from the first selection round, Boeing and Lockheed Martin were both offered contracts to produce two concept demonstrator fighters.

With little flexibility on the Pentagon’s highly detailed checklist of features and specifications, Boeing sought to distinguish itself based on cost. To this end, the X-32 used the same, massive delta wing as the foundation for all of the three fighter variants mandated by the JSF program. The result was, by wide consensus, an exceedingly ugly-looking aircraft. There is some indication that Boeing planned big design changes for future models, including a sleeker delta wing and redesigned nose, but nevertheless: the X-32 demonstrator model’s bizarre aesthetic hardly did Boeing any favors.

Employing a direct-lift thrust vectoring system, the X-32 reached top speeds of just under 1.6 mach. The X-32’s internal bay loadout supported six AMRAAM air-to-air missiles, or a combination of up to two air-to-air missiles and two bombs. Despite their significantly different designs, the X-32’s performance was roughly in line with rival Lockheed’s Martin’s X-35 concept demonstrator.

So, why didn’t the X-32 make the cut? For one, its direct lift system was prone to pop stalls, or severe malfunction caused by hot air being ingested into the engine. The government also expressed concerns as to whether the X-32’s engine was powerful enough to support its reported maximum take-off weight of 50,000 pounds.

Worse still, eight months into the competition, the JSF’s aerodynamic requirements were revised at the behest of the Navy. Boeing engineers managed to make some slight changes to the tail, but it was too late to meaningfully redesign the delta wing to fully comport with the new JSF guidelines.

Despite its cost-cutting strategy, Boeing wound up building two prototypes, each demonstrating different aspects of the JSF’s specifications guidelines: a conventional-flight model demonstrating supersonic performance, and an X-32B short take-off and vertical landing (STOVL) variant. Boeing insisted that these features will be unified with the serial F-32, but its rival X-35 demonstrator model was already capable of doing both. Vertical take-off/landing capability was a core pillar of the JSF guidelines, and the Pentagon simply did not buy into Boeing’s vision for STOVL integration.

The Lockheed Martin X-35 was formally declared the winner over Boeing’s X-32 in 2001. In hindsight, it’s difficult to gauge whether or not the DoD made the right decision. From rampant budget concerns to the implicit technical challenges of implementing cutting-edge technologies like sensor fusion, it’s highly likely that Boeing would have encountered broadly similar problems as to those that have plagued the F-35 program for the past decade.

Boeing, for its part, has taken the loss in stride, describing the X-32’s R&D process as a “strategic investment” that paid off during subsequent work done on the F/A-18E/F Super Hornet fighter and X-45A drone.