Suffren-Class: France's New Killer Submarine That Can Do Everything 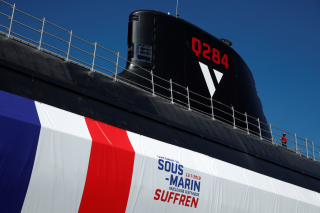 Here's What You Need To Remember:  Once complete, the class may be one of the most advanced nuclear attack submarines in Europe. And, replacing the nearly forty-year-old Rubis-class couldn’t come at a better time.

The Suffren-class (also known as the Barracuda-class) is the long-awaited replacement for the capable but Cold War-era Rubis-class, the Marine Nationale or French Navy’s current nuclear-powered fast-attack submarines. And they are formidable.

The mission type the Suffren-class is intended for include special operations insertions, land and surface attack, convoy escort, and submarine hunting. Though the class lacks vertical launching tubes for cruise missiles, that doesn’t stop them from firing such munitions via any one of their four torpedo tubes. One of the munitions the Suffren-class is equipped to fire is particularly potent.

The Storm Shadow, an Anglo-French built and designed cruise missile, has some low-observation features, making it hard to detect. A specialized French variant, called SCALP EG, has a range of about 1,000 kilometers, or just under 625 miles and can be fired by the Suffren-class. At those ranges, Suffren-class submarines could strike targets hundreds of miles out to sea, or lie in wait near enemy shores and hit targets far inland. And, of course, like all submarines, the class is also able to fire torpedoes from its torpedo tubes.

As the first of the six-hull Suffren-class, the Suffren showcases what the other five hulls will feature. One of the more interesting pieces of technology, and a first for the French Navy, is an optronic mast. This sensor, which includes a high-definition camera as well as a laser rangefinder, replaces the traditional periscope mast that submarines are typically fitted with. The design is a boon to the submarine’s structural integrity, as a large hole to accommodate a periscope does not need to be drilled through the hull.

In order to support special operations missions, the Suffren, and possibly other Suffer-Class subs will also likely be equipped with a lockout chamber that will allow combat swimmers both access to the outside of the submarine and access to miniature subs for transport elsewhere.

At roughly 5,000 tons, the Suffren-class is fairly typical of attack-submarine designs, though it is considerably smaller than attack submarines of other countries. For comparison, the Royal Navy’s Astute-class is around 7,500 tons, whereas the American Virginia-class and Seawolf-class are over 8,000 tons each. Though the Suffren-class may seem diminutive, the reason for their smaller displacement is due in part to a large degree of automation onboard, freeing up their roughly sixty-man crew for other tasks.

Though not the largest submarines in the world, the Suffren-class benefits from being nuclear-powered since that means the submarine’s insurance is limited only by onboard food stores. Once complete, the class may be one of the most advanced nuclear attack submarines in Europe. And, replacing the nearly forty-year-old Rubis-class couldn’t come at a better time. Soon the Marine Nationale will be up to speed with their North Atlantic Treaty Organization counterparts.

Caleb Larson is a defense writer for the National Interest. He holds a Master of Public Policy and covers U.S. and Russian security, European defense issues, and German politics and culture. This article was originally published earlier this month.