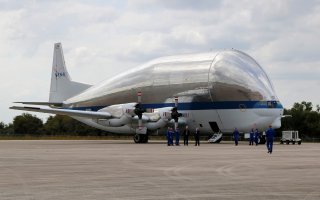 Here's What You Need to Know: Logistics were about a third of the cost of the Saturn V program, so any delivery improvement in speed or reliability was imperative.

It was the 1960s, the Space Race with the Soviet Union was on and NASA was in the throes of the Apollo program. Rockets and rocket stages, crew modules, command modules—huge components for getting Americans to the moon were being manufactured on the West Coast and sent to the East Coast for final assembly and launch at Cape Canaveral, Florida. But NASA had a logistics problem.

Getting a 363-foot Saturn V rocket erected for launch was a complex maneuver. Hundreds of components had to be sent to Florida from all around the country and assembled in time to meet strict countdown schedules. So-called launch windows were inflexible and contingent on the orbits of the Earth and the Moon, and weather. Any hiccup, however small, could set back a launch date by days or weeks.

These West Coast components were typically transported by sea barge from California, down the West Coast, through the Panama Canal locks, into the Gulf of Mexico, and north to Florida—a journey that could take weeks. Delivery schedules were partly reliant on weather, and delays caused by storms were long and costly.

Wernher von Braun, the German space engineer who led NASA’s Saturn V super heavy-lift rocket development, said that logistics were about a third of the cost of the Saturn V program, so any delivery improvement in speed or reliability was imperative.

A former Army pilot and entrepreneur, John Conroy, had the answer. As I previously wrote, Conroy envisioned and built a series of heavy transport planes for NASA from retired Pan Am B-377 airlines. He founded Aero Spacelines, and the Guppy series of oversized cargo transport aircraft were born.

Aero Spacelines fabricated a large dome that was mated to the top of the fuselage, which resulted in the iconic Pregnant Guppy. The Pregnant Guppy planes could carry a heavy, bulky payload, and were able to transport most of NASA’s components.

For the project, Conroy acquired a Boeing C-97J Turbo Stratocruiser, which was lengthened and the fuselage was raised and widened, which gave it the typical puffy Guppy appearance. In contrast to the Pregnant Guppy, which had a removable tail assembly for rear-only loading, the Super Guppy loaded from the front. The entire nose—cockpit and dome front—swung outwards. This had the advantage of lowering the fuselage area slightly, which simplified loading and unloading.

Conroy also designed the Super Guppy Turbine, this time partially from scratch. Aero retained the Boeing 377 fuselage, but this time made it both wider and longer, which allowed the SGT to carry larger components. The front landing gear was taken from a Boeing 707, which lowered the loading area even further, easing loading logistics.