Supercarrier? What You Need to Know About China's Third Aircraft Carrier 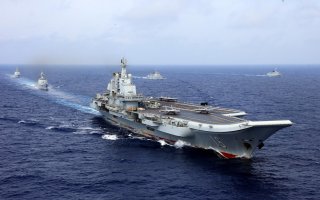 Here's What You Need to Remember: The new carrier is expected to have an electromagnetic catapult launch system, which is more effective than the ski jumps, while it could be considerably larger. It is expected the full displacement will be in excess of 80,000 tons – making it a heavy carrier.

Progress is being made on the People's Republic of China's third aircraft carrier. According to online reports the carrier could be launched as soon as the end of this year, but experts told the Chinese defense industry magazine that the launch would more likely be early next year. It has been nearly two years since the Xinhua News Agency first revealed that the third domestically built Chinese aircraft carrier was even under construction.

The Global Times reported that progress has steadily progressed and that hull sections arrived at the Shanghai-based Jiangnan Shipyard in June for final assembly. As of photos taken earlier this month only the bulbous bow was missing – and the news outlet added that the hull should be completed by November or December, and could be launched soon after.

It will still be several years before the carrier is fitted out or ready to begin its sea trials, however, this third carrier will likely be finished far more quickly than the Shandong, the People's Liberation Army Navy's (PLAN's) second carrier and the first to be built in China. The third carrier has utilized a more advanced construction method – one in which large hull sections were built in different places and then sent to Shanghai for final assembly.

This production method could greatly shorten the construction time for a carrier and has been used by the builders of commercial cruise ships for decades. In addition, some outfitting work will be conducted in advance at other facilities, which will further shorten the outfitting time.

The PLAN's first carrier, Liaoning, is actually a Soviet-era aircraft-carrying cruiser that was built at the tail end of the Cold War and then sold to China. Shandong is slightly bigger and was build to carry a larger airwing but it was still based on the Soviet design and included a ski jump-assisted short-takeoff-but-arrested recovery (STOBAR) launch system to sortie aircraft.

The new carrier is expected to have an electromagnetic catapult launch system, which is more effective than the ski jumps, while it could be considerably larger. It is expected the full displacement will be in excessive of 80,000 tons – making it a heavy carrier. By contrast, the previous two carriers, at approximately 60,000 tons, are considered medium-sized carriers.

The PLAN's newest carrier is part of an aggressive, multi-year Naval modernization initiative that could further help China emerge as a leading global power. The addition of an electromagnetic catapult is a notable step forward as well and could put China in an elite status when it comes to carriers.