The U.S. Navy's Most Powerful Weapon: The Nimitz-Class Aircraft Carrier 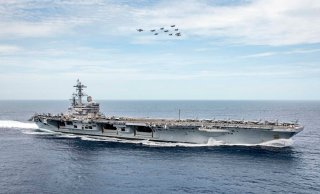 Here's What You Need To Remember: There are concerns that the aircrafts’ five hundred and seven hundred miles combat radiuses will force carriers to come dangerously close to enemy shores. New long-range ground-based ballistic missiles, air and sea-launched supersonic cruise missiles, and very quiet yet inexpensive AIP-powered submarines pose major new challenges to the carrier’s survivability in littoral waters, and their role in a high-intensity conflict in the Western Pacific is subject to debate.

Sébastien Roblin holds a Master’s Degree in Conflict Resolution from Georgetown University and served as a university instructor for the Peace Corps in China. He has also worked in education, editing, and refugee resettlement in France and the United States. He currently writes on security and military history for War Is Boring. (This first appeared in 2018.