Tac-50: This Sniper Rifle Can Kill You From Over 2 Miles Away 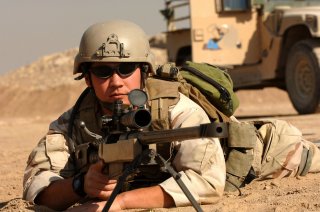 Here's What You Need to Remember: By offering the operator an unprecedented degree of target versatility between infrastructure, light armour, and high-value personnel, the Tac-50 gave the AMR platform a newfound lease on life.

Anti-materiel rifles (AMR) have long been thought to have little practical use, except against a dwindling niche of light vehicles vulnerable to .50 BMG rounds. Then came the McMillan Tac-50, a revolutionary military firearm that combines the reach and stopping power of an AMR with the accuracy of a typical military-grade sniper rifle.

The AMR was conceived as an anti-tank weapon during World War I. Seeking a weapon that could penetrate the reinforced hull of the British Mark IV tank, the German Empire produced the first AMR rifle: the 1918 Mauser T-Gewehr. The AMR platform went on to see its heyday during the Second World War, as the British Boys Anti-Tank Rifle and Soviet Degtyarev PTRD-41 proved effective against Nazi Germany’s Panzer I,II, and III tanks. But over the next several decades, advancements in main battle tank (MBT) defenses would rapidly outpace the penetrating power of the .50 round. By the end of the Cold War, AMR’s were only relevant against light armor and, in a pinch, certain types of infrastructure.

In 1996, firearms manufacturer McMillan sought to breathe new life into an AMR platform that was increasingly verging on obsolescence. Released seven years after the powerful but relatively inaccurate M107, the Tac-50 was designed as an AMR that could double as a long-range sniper rifle. Deceptively light for its class at 26 pounds, the Tac-50 is a .50 caliber rotating bolt-action rifle boasting a 29-inch, high-quality Lilja barrel and McMillan’s signature fiber-glass stock. In keeping with similar AMR’s, the Tac-50 comes without any factory-installed sights and is compatible with a wide range of telescopic mounts. An absolute requirement at this distance of shooting, the Tac-50 comes with a proprietary muzzle brake to increase accuracy and mitigate the immense recoil generated by the .50 caliber.

The Tac-50 impressed militaries around the world with its startling accuracy, leading to its adoption by the U.S Navy SEALs under the “MK 15” designation, branches of the French Navy, Turkey, Israel and others. There is little question, however, that the Canadian special forces group JTF2 (Joint Task Force 2) remains by far the most prolific Tac-50 operator. In a  2017 mission against ISIS targets, a JTF2 sniper recorded the world’s longest sniper kill at a staggering 3,871 yards or 2.19 miles. It bears noting that the Canadian armed forces currently occupy three of the five longest recorded sniper kills in the world, all performed with the Tac-50.

Seeking to build on this breakaway success, McMillan released two Tac-50 successors in 2012: the Tac-50 A1, and Tac-50 A1-R2. The A1 boasts a host of practical design improvements, including a longer take-down fiberglass stock, a lighter-but-sturdier bipod, redesigned buttstock, and self-locking magazine latch. The A1-R2 features all the design improvements of the A1, along with a proprietary hydraulic recoil mitigation system that McMillan claims will reduce peak recoil by 90 percent.

Rated at a guaranteed half-MOA (minute of angle) with the proper ammunition, the Tac-50 is one of the few AMR’s accurate enough to double as a long-distance sniper rifle. By offering the operator an unprecedented degree of target versatility between infrastructure, light armour, and high-value personnel, the Tac-50 gave the AMR platform a newfound lease on life. Firearms manufacturers have since attempted to further develop this concept, including McMillan itself with its TAC-416 chambered in .416 Barrett, but the Tac-50 remains one of the best and only rifles of its kind.