Taiwan is Working Hard to Make Any Chinese Invasion Would Fail 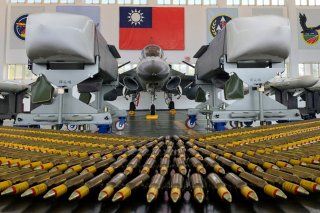 Here's What You Need to Remember: In the event that a Chinese amphibious force got close to shore, it would likely confront additional impediments, such as new Taiwanese submarines and Abrams tanks. The concept would be to stall, disrupt and destroy enough of any attacking amphibious force to in effect buy time until larger numbers of allied defenders can arrive.

The exercise, which took place Nov. 18, “could be simulating a mission to land on a large island or a large group of islands and reefs,” a story in the Chinese government-backed Global Times reports.

All of this raises a pressing and interesting question in light of recent Chinese comments about forcible reunification with Taiwan: just how quickly could an attacking Chinese Navy amphibious assault force take over Taiwan? It is certainly a question now commanding a large amount of attention among Taiwanese and U.S. military planners, who might be looking at a number of key dynamics impacting this equation.

First, any kind of Chinese movement toward Taiwan with amphibious attack assets would seen and closely monitored by Taiwanese, U.S. and other allied surveillance assets in the area. This surveillance would give commanders and those wishing to defend Taiwan an opportunity to plan and respond. Would China be able to make any kind of a successful initial entry or incursion before the U.S. Navy would have an opportunity to react with sufficient defensive power?

To this question I would likely say no, for several reasons. Long range sensors, satellites and surveillance assets are not only regularly operating in the region in large numbers, but they are reaching new levels of technological sophistication when it comes to image fidelity, targeting and, most of all, newer kinds of hardened networking. This circumstance, which would draw upon Low Earth Orbit satellites, high altitude surveillance planes, ground based radar and sensor nodes from surface ships and aircraft, would likely make it next to impossible for any kind of closely approaching Chinese force to attack uncontested. Why? The answer is one word: weapons.

Ship or submarine launched Tomahawk missiles can now pinpoint moving targets at sea from ranges as far as 900 miles, land-fired rockets could easily reach well into the 140-mile gap separating mainland China from Taiwan, and given Taiwan’s proximity, U.S. fighter jets from Guam or other allied territories in the region would be well within any kind of striking range. Fighter jets, anti-ship missiles and even land-fired artillery could travel far enough and long enough to disrupt, and even possibly destroy, key elements of an attacking Chinese amphibious force. China could not assume air superiority, nor can surface ships move fast enough to outpace fighter jets racing faster than the speed of sound to attack approaching amphibious forces.

In the event that a Chinese amphibious force got close to shore, it would likely confront additional impediments, such as new Taiwanese submarines and Abrams tanks. The concept would be to stall, disrupt and destroy enough of any attacking amphibious force to in effect buy time until larger numbers of allied defenders can arrive.