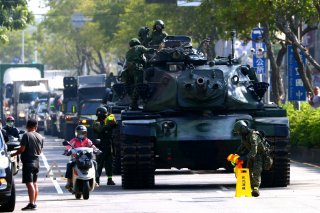 Here's What You Need to Remember: The Taiwanese Army recently announced that it will upgrade the equipment and systems on many of those M60A3s. The plan's partial upgrades are scheduled to begin next year to strengthen the second-generation main battle tanks’ (MBTs) combat and defense capabilities.

If the People's Liberation Army were to mount an invasion of the self-governed island of Taiwan, it would face many aging tanks, including hundreds of M60A3s. The Taiwanese Army recently announced that it will upgrade the equipment and systems on many of those M60A3s. The plan's partial upgrades are scheduled to begin next year to strengthen the second-generation main battle tanks’ (MBTs) combat and defense capabilities.

The Liberty Times reported this month that the National Chung-Shan Institute of Science and Technology (NCSIST) will conduct the work as part of a contract worth NT$444.01 million (US$15.9 million) spread over three years. If the Taiwanese Army is satisfied with the quality of the work on the first batch of tanks, it will then order a large-scaled upgrade of the systems.

The Legacy of Patton

While not officially part of the Patton series of tanks, the United States Army has considered the M60 – officially "Tank, Combat, Full Tracked: 105-mm Gun, M60," – to be an improved descendant of the Patton tank's design. It first entered service in 1959 and has been steadily upgraded and improved over the years. The M60 remains in use with some seventeen nations—a testament to the robustness of the design.

A total of 15,000 were built. The most common was the improved M60A1, which featured thicker armor and an upgraded ammunition stowage system. This was the most-produced American tank of the Cold War, and it wasn't just the U.S. Army that fielded them; the M60 Patton also saw service in the armies of 22 countries around the world. The U.S. Army retired its M60A3s in 1997, but around 1,700 are still in use with the Egyptian Army. Turkey and Israel operate around nine hundred and seven hundred of the tanks, respectively. Taiwan operates some four hundred and sixty M60A3s.

The Taiwanese Army's 586th Armored Brigade conducted drills in central Taiwan on Nov. 4. Those exercises featured the M60A3 tanks and other armored vehicles barreling down public roads and attracting the attention of passersby, the Liberty Times also reported.

In addition to the aging tank force, the island nation could get a boost from some much newer American hardware. In 2019, the U.S. State Department greenlit the sale of 108 M1A2T Abrams tanks, Stinger missiles, and related equipment to the island nation in a deal worth approximately $2.2 billion. However, even as Taipei could get newer tanks, it will likely maintain its aging tank force – because should the PLA attack, Taiwan will never every tank it can get.

This article first appeared last month and is being reposted due to reader interest.