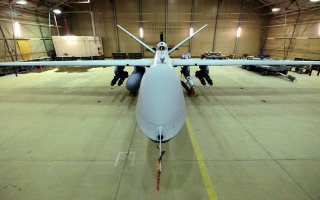 Here's What You Need to Know: Instead of an explosive charge, the missile uses several pop-out blades to chop up targets and prevent civilian casualties.

This fragment is reported to have been found at the site of what may have been an RX9 (Hellfire with frikken swords) strike.

If you looks closely, you can see what appear to be hinges, as well as being and twisted projections from those hinges.