A Tank of Firsts: For Russia, the T-64 was Special 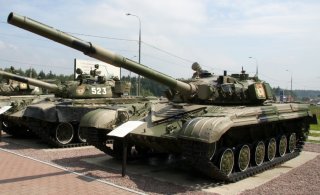 Here's What You Need to Remember: The T-64 was intended to fit the armor protection and firepower of a heavy tank onto a medium platform. This would, in theory, allow the tank to remain relatively nimble, despite the increase in firepower.

Despite the technological leaps that were made with the T-64 platform, it was doomed by it’s price and never exported outside of the Soviet Union, stationed initially in East Germany, poised to defend against a potential attack by NATO.

Not Your Mom’s Ceramics Class

The T-64 was intended to fit the armor protection and firepower of a heavy tank onto a medium platform. This would, in theory, allow the tank to remain relatively nimble, despite the increase in firepower.

In order to achieve an adequate level of protection, a type of composite armor was fitted onto the T-64. This armor was essentially a layer of glass-reinforced plastic that was sandwiched in between two layers of ceramic, that were in turn sandwiched in between two layers of steel. More lightweight than a single, equally thick layer of steel, and significantly lighter. Armor — check.

In order to fit the additional firepower into a medium tank-sized package, an autoloader was designed into the turret, reducing the crew by one, from four to a total of just three. One less body, plus a new, more compact engine design, kept the T-64 profile relatively small.

While innovative and extremely compact, the new engine design was plagued by reliability issues. It had achieved its purpose — a compact design — at a steep reliability cost, and an increased production cost.

Before mass production, T-64 prototypes experimented with a 115-millimeter gun, a 10-millimeter upgrade from it’s predecessor, the T54/55 series. Ultimately though, Soviet engineers went in a different direction and settled on a 125-millimeter smoothbore gun. This allowed the tank to fire anti-tank guided missiles.

While the 125-millimeter gun was a marked increase in firepower, the longer and larger diameter rounds took up more internal storage space than the 100- or 115-millimeter rounds had. Combined with the emphasis on maintaining the lower profile of a medium tank, there was less internal storage capacity available for main-gun ammunition, reducing the number of rounds available to the gunner and tank.

Despite the aforementioned drawbacks, the T-64 platform is still used as a front-line tank, albeit with significant upgrades. In Ukraine, the heavily modified T-64BM Bulat has been outfitted with a number of upgrades, including explosive reactive armor (ERA) and an upgraded fire control system, and giving them a new lease on life.

If true, then Ukraine’s T-64s may have some bike left in their bark.