The Ten Most Insane Shoot-Downs in Military History 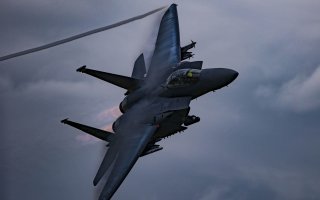 Key Point: The history of aerial combat has its fair share of weird stories.

On Sept. 25, 2013, an Afghan air force MD-530F helicopter crewed by an Afghan student pilot and his American instructor touched down on a hilltop near Shindand air base, in western Afghanistan, as part of routine training.

An Improvised Explosive Device exploded, wrecking the copter and badly injuring the two crew. A U.S. airman coming to the rescue “faced a scene of broken bones, blood near the burning aircraft,” according to a U.S. Air Force report.

“The location of the IED on top of a hill, presumably away from any roads, suggests that the Taliban may have actually targeted the helicopter after having previously observed the Afghan air force using the location for pilot training,” Jane’s noted.

As strange as it is for a helicopter to be “shot down” by an IED on the ground, that’s not the only weird warplane kill in recent history. Among other strange shoot-downs since the mid-1980s, warplanes have destroyed other aircraft using laser-guided bombs or accidentally shot each other down during training events. Drones have been destroyed in a hopelessly lopsided dogfight and downed by a friendly plane after malfunctioning.

What follows is a partial list of the oddest aerial combat victories of the modern era.

The USS Saratoga aircraft carrier was the focus of a Mediterranean war game pitting Air Force recon planes versus the flattop’s F-14 fighters. A two-man RF-4 zoomed towards the carrier, aiming to snap a photo of the vessel at close range—thus scoring points for the Air Force team.

A very junior F-14 pilot named Lt. Timothy Dorsey, son of a Navy admiral, misinterpreted the command “red and free on your contact” and fired a live Sidewinder missile at the Air Force plane. “I was taught and told that ‘red and free’ was an expression that would never be used unless it was a no-kidder, a real-world threat situation,” Dorsey explained later.

On the first night of the Gulf War, an EF-111 radar-jamming plane was intercepted by an Iraqi Mirage fighter. As an American F-15E raced to help, the unarmed EF-111 crewed by Captains Brent Brandon and James Denton dodged a missile fired by the Mirage—and then dove low.

The EF-111 was a version of the F-111 bomber fitted with sophisticated terrain-following radar that allowed the plane to fly very close to the ground—200 feet or less—and fast, automatically climbing up and over hilltops. “We trusted the system,” one Vietnam-era F-111 pilot told Combat Aircraft magazine.

The French-made Mirage had no such gear. When Brandon and Denton went low, the Iraqi pilot tried to follow … and plowed into the ground, presumably killing him. The EF-111 crew were decorated for their strange aerial victory.

As the Gulf War aerial campaign expanded, an Air Force F-15E bomber crew—Tim Bennett and Dan Bakke—targeted an Iraqi Hughes 500 helicopter while the copter was on the ground at its air base. As a laser-guided bomb arced down, the helicopter took off.

The America fliers kept the F-15's laser pointed at the helicopter, continuing to guide the bomb. The munition passed directly through the Hughes’ rotor disc, destroying the helicopter. An American Special Forces team on the ground witnessed the unlikely aerial kill.

Eighteen years later, the same F-15E, of course flown by a different crew, was on patrol over Afghanistan when a U.S. MQ-9 drone malfunctioned and stopped responding to its operators on the ground. The F-15 crew fired a Sidewinder missile, destroying the rogue robot before it could cross into another country’s airspace.

A flight of Air Force F-15s engaged Iraqi planes in the waning days of the Gulf War. After F-15 jockey Thomas Dietz shot down an Iraqi Su-22 bomber, the Iraqi pilot of a turboprop flying nearby—probably a PC-7—got spooked.

Apparently fearing he was about to be shot down by another F-15 flown by Bob Hehemann, the PC-7 pilot ejected from his perfectly good airplane before anyone had even fired at him.

During air combat training over the Pacific, a Japanese F-15 fighter pilot accidentally launched a live Sidewinder missile at fellow flier Lt. Tatsumi Higuchi in another F-15—hitting the plane and forcing Higuchi to eject.

Seven months later during a war game with U.S. forces, the Japanese warship Yuugiri opened fire with its Phalanx gun on a two-man American A-6 bomber towing a practice target. The A-6 crashed and Yuugiri’s crew fished Lt. Cmdr. William Royster and bombardier-navigator Lt. Keith Douglas out of the water.

Tokyo apologized, but The New York Times pointed out the uncomfortable symbolism of a Japanese ship shooting down an American plane near Pearl Harbor. “The Japanese pacifists will have a field day with this,” a Pentagon official said. “They remember Pearl Harbor better than we do.”

In the aftermath of the Gulf War, Air Force drones patrolled Iraqi airspace in order to keep tabs on Baghdad’s forces. Iraqi MiGs often chased away the unmanned spy planes, prompting the Pentagon to arm some of the robots with Stinger air-to-air missiles.

That effort ended in embarrassment for the flying branch when an MQ-1 Predator confronted an Iraqi MiG-25 fighter — and was promptly knocked out of the sky as its Stinger trailed off into the distance.

The MQ-1's destruction helped change the Air Force’s attitude towards the slow-flying drones. “There’s very little about their current capabilities — from their speed to their maneuverability to the range of visibility afforded to operators — that encourages operators to arm or employ them for air-to-air engagements in defended airspace,” said Air Force spokesman Lt. Col. Tadd Sholtis.

The British Royal Air Force made the mistake of repeatedly using the same airstrips to supply U.K. troops patrolling the deserts of southern Iraq and Afghanistan. In 2006, a C-130 struck a mine while landing in Helmand, Afghanistan.

“The crew and passengers, which included the British ambassador to Afghanistan and a number of [commando Special Boat Service] troops, managed to escape the fire but the C-130, two [Special Air Service] 4x4 vehicles and a large quantity of cash was destroyed,” according to one blog.

In Maysan, Iraq, insurgents placed an improvised explosive on one known airstrip … and waited. In 2007, a C-130 came in for a landing and the bomb went off. Badly damaged, the airlifter had to be destroyed in place.

But weirdly, Iranian pilots have reported the UFOs doing things no known drone can do: hovering, glowing and scrambling the intercepting jets’ systems, according to Babak Taghvaee, writing in Combat Aircraft magazine.

An Iranian F-14 tasked with catching a luminous flying object exploded on takeoff, killing both crew. Taghvaee implied that UFO was somehow responsible, as the F-14 in question was “one of the fittest” of Iran’s warplanes, presumably ruling out mechanical failure.