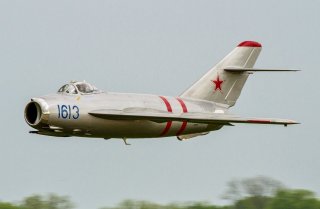 Here's What You Need to Remember: In the hands of North Vietnam, the MiG-17 shone. Smaller and slower, the MiG-17 were much lighter and significantly more maneuverable at low speed than the Republic F-105 Thunderchiefs and F-4 Phantoms it ran up against. Superiority at low speed — and maneuverability was the name of the game.

Although it never achieved parity with its American counterparts, the MiG-17 was surprisingly nimble — especially in Vietnam, where despite being decades older, slower, and outgunned, it managed to shoot many Americans out of the sky.

The MiG-15 was a capable little plane that even gave F-86 Sabres a run for their money. But, it had its drawbacks. Flight became stable approaching Mach 1 speeds and automatically slowed down when nearing Mach .92. It used reverse-engineered Rolls-Royce engines that the United Kingdom had naively given to the Soviet Union that performed similarly, but were heavier.

Still, the MiG-15 was able to successfully hunt American Superfortresses in Korea, and later investigations showed that the American kill claims were very inflated — MiG-15s enjoyed near-parity in kill ratios with their American counterparts.

Something better was needed.

Quite a few changes went into the MiG-17 platform, which is essentially a more refined version of the MiG-15.

For starters, the MiG-17 was able to fly with afterburners, a flight mode in which fuel is dumped into the exhaust, igniting and creating more thrust. The wings were more steeply swept, as was the tail. The wings were also reinforced and stiffened, which prevented bending and deformation at speeds approaching Mach 1, and therefore greater controllability.

In the hands of North Vietnam, the MiG-17 shone. Smaller and slower, the MiG-17 were much lighter and significantly more maneuverable at low speed than the Republic F-105 Thunderchiefs and F-4 Phantoms it ran up against. Superiority at low speed — and maneuverability was the name of the game.

So successful were MiG-17s — in the hands of both skilled Vietnamese pilots as well as allegedly some Russian pilots — that the United States acquired several MiG-17s from Israel in order to evaluate their capabilities and determine what tactics American pilots should employ in order to shoot down the North Vietnamese pilots.

A declassified NSA document summarizing the results of the evaluation says it best, if somewhat shockingly.

“Every Navy pilot engaged in the project lost his first engagement with the Fresco C [the MiG-17 variant being evaluated.].

The document continued, complimenting the MiG-17 despite its age.

“The great majority of tactical engagements against the MiG-17F in SEA have been in the low altitude regime where the FRESCO C low wing loading and 8g structural limit are best optimized and utilized. It is the outstanding maneuverability the airplane possesses in this area that permits this rather old and simple fighter airplane to remain such a potent threat in this day of sophisticated modern weaponry."

Over 10,000 MiG-17 series were produced and served in Chinese, Vietnamese, Soviet, East German, and Polish air forces, to name a few.

For such a little fighter, the MiG-17 continues to surprise.