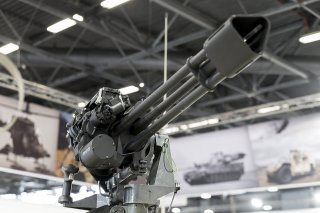 The U.S. Army has many powerful weapons, but these four are some of the most deadly and distinctive.

The Carl Gustaf is a Swedish-designed, 84mm recoilless rifle that, thanks to its light-weight design, is a favorite of special forces, paratroops as well as mountain warfare specialists—essentially any unit that would puts a premium on how many pounds its forces can carry. The Swedish armed forces introduced the Gustaf just after World War II, and since then it’s weight has steadily decreased. Thanks to a titanium-lined barrel and carbon fibre components, today’s Gustaf weighs a mere fifteen pounds, or under 7 kilos. And regardless of what the mission calls for, the Gustaf has elevent types of ammunition to get the job done, including high-explosive, high-explosive anti-tank, area defense, and rocket-assisted laser-guided precision ammunition.

The United States’ main battle tank is arguably the best-protected, most battle-tested tank currently in existence. Though the Abrams has been exported to a number of U.S. allies in the Middle East as well as to Australia, M1s in American service are special. They make use of depleted uranium armor protection on the hull and turret for superior protection against kinetic energy penetrators. In addition, American Abrams can fire a depleted uranium armor-piercing discarding sabot round that is optimized for reactive armor protection, such as the type of armor the Soviet Union and later Russia used to protect their tanks. Depleted uranium penetrator fragments can also spontaneous combust when heated, like when striking an armored vehicle, further enhancing their lethality.

Since it was introduced into American service during the Vietnam War, the Mk 19 40mm automatic grenade launcher has been immensely popular—for good reason too. It packs an incredible amount of firepower on a relatively compact platform. One of its few shortcomings? It weighs more than seventy-five pounds. The Mk 47 addresses this issue and is under forty pounds, making it easier to transport, even by dismounted soldiers. It fires the same 40mm ammunition as the older Mk 19, and can even fire air-burst ammunition, which can be used to hit targets behind walls or in trenches.

The mighty GAU-19 is a triple-barred rotary heavy machine gun. Like the iconic and ubiquitous M2 Browning heavy machine gun, the GAU-19 fires the half-inch diameter .50 caliber BMG cartridge—though at a much higher rate of fire. Whereas the M2 fires 450 to 600 rounds per minute, the GAU-19 fires a staggering 1,000, 1,300, or 2,000 rounds per minute, depending on which fire setting is selected and which variant is used. This video shows the GAU-19 in action and is worth the watch.