These Fighters Once Carried Nuclear Rockets to Attack Soviet Bombers 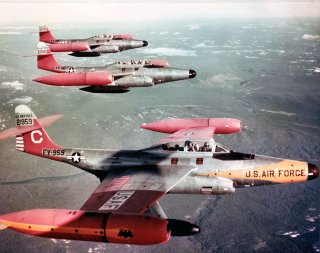 Here's What You Need to Remember: Starting in 1957, 350 F-89Ds were converted to the F-89J model capable of hefting two of the 820-pound Genie rockets, each under its prominent wingtip-mounted fuel tanks.

On July 19, 1957, five Air Force officers assembled in the open desert basin of the Yucca Flats of Nevada and glanced with nervous smiles up at a jet fighter flying high overhead.  They were accompanied by a civilian defense photographer wearing a baseball hat named George Yoshitake.

Sébastien Roblin holds a Master’s Degree in Conflict Resolution from Georgetown University and served as a university instructor for the Peace Corps in China. He has also worked in education, editing, and refugee resettlement in France and the United States. This first appeared earlier and is being posted due to reader interest.