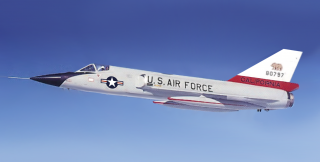 In September 2019, the Air Force Assistant Secretary for technology acquisitions Will Roper called for a new “Century of Series” of jet fighters.