Stealth History: How the F-35 Lightning Took To the Sky 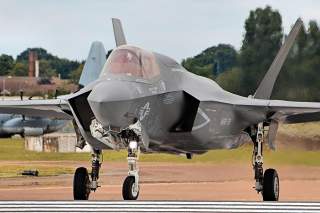 Love it or hate it—and certainly, its torturous development offers many lessons on practices best avoided—the F-35 is here to stay. Thus, the low-observable jet’s success, or lack thereof, in fulfilling the Pentagon’s new paradigm of air warfare will remain closely scrutinized for decades to come.

In 2019, the first fully-combat capable of F-35 Lightning stealth fighters with Block IIIF software will finally enter service—twenty-seven years after it was first conceived, and after over 350 aircraft have already been delivered. Just how did the F-35 go from being a glimmer in the eye of Pentagon bureaucrats to the most expensive weapon system in human history?

In the 1980s, the Pentagon began looking ahead to replacing its formidable stable of fourth-generation fighters with stealth aircraft. The Air Force’s Advanced Tactical Fighter competition would eventually yield a highly capable air-superiority stealth fighter, in the F-22 Raptor. But the Navy and Marines still wanted their own stealth jets, and the Air Force had a large fleet of single-engine F-16 multi-role fighters which the Raptor was too pricy and specialized to replace.

Thus, in 1992 the Navy and Air Force combined their CALF and JAST programs into the Joint Strike Fighter program. Its goal was to devise a cheaper, single-engine attack-oriented stealth fighter, variants of which could be used by all three services to save on costs and which could be exported to U.S. allies across the globe—unlike the F-22. Better yet, the JSF would incorporate cutting-edge digital and material technologies to improve efficiency.

The requirement to use a common design for all three services, however, was the program’s original sin. For example, the Navy’s “C” variant designed for carrier take-off-and landing would require larger wings for greater lift and ruggedized landing gear. More problematically, the Marine Corps insisted it needed a jump jet to replace its Harriers, which are capable of lifting off and landing vertically from the decks of smaller amphibious carriers or even primitive frontline bases.

However, VTOL capability adds bulk to a fighter, and jump jets like the Harrier and Yak-38 were far inferior in speed, payload and range compared to conventional contemporaries. Unfortunately, the imperative to maintain commonality in the JSF meant even the non-jump jet versions of the JSF would share a chunky drag-inducing fuselage.

Here, the F-35 origin story takes a bizarre detour to Yeltsin-era Russia. As the Soviet Union dissolved, the abruptly cash-starved manufacturer Yakovlev sought a partner to fund development of its fork-tailed Yak-141 jump jet which featured a separate lift fan and could attain supersonic speeds. In 1991, Lockheed acquired three Yak-141s and valuable test data from the Russian company for around $400 million.

In 1996, the Pentagon awarded Boeing and Lockheed each $750 million to produce two prototypes which were test flown five years later. Boeing’s XF-32 was an infamously ugly, chunky delta-wing design which used vectored thrust by tilting the exhaust nozzles downward for vertical lift. Meanwhile, the X-35 used lift fans, like in the Yak-141, but in this case driven by a separate shaft, a more sophisticated and complicated solution.

In 2001, the Air Force announced the more polished F-35 the winner of the JSF competition. The Defense Department secured development money from prospective operators, including Australia, Canada, Israel, Italy, Japan, the Netherlands, Norway, South Korea, Turkey and the United Kingdom. F-35 partners received their own slice of the enormous component manufacturing and maintenance pie, integration of domestic missiles and other perks.

However, designing a “clean” airframe was actually the easy part—as the Pentagon planned to stuff the Lightning full of yet-to-be-developed cutting-edge technologies. One advance was to use modular panels with baked in radar-absorbent material for the F-35’s skin, instead of having it laboriously applied before each flight.

Other new tech included a helmet-mounted display system allowing pilots to “see” through the plane, upgradeable open-architecture missions computers, advanced defensive suites tied to a multi-sensor called the Distributed Aperture System, stealthy datalinks allowing an F-35 to network sensor data with friendly forces, and a discrete Low-Probability of Intercept APG-81 radar. Ground-side, F-35s would come with flight simulators instead of two-seat-trainers, and a logistics system for logging maintenance reports and procuring spare parts.

Normally, it’s prudent to integrate new technologies into proven baseline systems. However, the Pentagon approved concurrent development of the F-35’s avionics, software and airframe, meaning the “baseline” F-35 was constantly evolving. This resulted in cascading delays and cost overruns as the all-new technologies failed to integrate as easily as expected.

The Lighting grew 2,000 pounds overweight, causing the aircraft to undershoot range specifications —particularly for the F-35B jump jet model. This necessitated a slimmed redesign which may have contributed to structural flaws discovered in early-production F-35B aircraft.

The Government Accountability Office began ringing the first alarm bells in 2006. By 2009, gigantic cost overruns attracted scrutiny from Defense Secretary Robert Gates, who restructured the F-35 program and even contemplated canceling it. But the Lightning had grown too big to fail, having sucked money and development effort away from any possible alternative. Gates even cut production of the higher-end F-22 to just 180 aircraft out of the original planned 500.

As the F-35 fell a half-decade behind schedule, the Pentagon had to invest additional money in extending the service life of older jets. Meanwhile, the Department of Testing and Evaluation kept on finding hundreds of bugs ranging from defective oxygen systems and misaligned cannons to unexpected computer shutdowns. Meanwhile, Canada canceled its F-35 order.

The F-35 was only rated “initial operation capable” for Marine Corps service in 2015 and the Air Force in 2016, and then only by watering down requirements. Navy F-35Cs will only attain IOC in 2019.

The low-rate initial production of the ostensibly affordable F-35 came out to over $200 million per plane—and those aircraft lacked key features, effectively making them test beds to refine systems that would take many years more to develop. They will require expensive upgrades if they are ever to fly operationally.

As for the vaunted cost-savings of operating three variants of the same plane? The three types share only 20% of their parts in common.

In 2013, the F-35 also came under criticism for its limited range and inferior speed, service ceiling, maneuverability and internal weapons load compared to its predecessors. F-35 supporters contend that these deficits are less important than the Lighting’s stealth, and long-range sensors and missiles, which theoretically allow F-35 pilots to pick their fights and largely avoid dangerous short-range encounters. The debate over the F-35’s effectiveness is further detailed in these earlier articles.

Development and procurement of roughly 2,400 F-35s through 2037 is now estimated cost over $400 billion, roughly eight times the annual defense spending of Russia. Operating expenses through 2070 are estimated to cost an additional $1.1 trillion.

However, though still dogged by defects, delays and low readiness rates, the F-35 program made notable progress in 2018. F-35A unit price was finally reduced to $89 million per plane, and Israeli F-35Is and Marine F-35Bs saw their debut in combat. Lightnings have dominated in air combat exercises. Belgium and Singapore recently decided to procure F-35s, and future potential clients include Greece, India, Poland, Romania and Spain. The F-35B jump jets will serve on Italian and British carriers and have even inspired Japan to resurrect its carrier-aviation branch.

Love it or hate it—and certainly, its torturous development offers many lessons on practices best avoided—the F-35 is here to stay. Thus, the low-observable jet’s success, or lack thereof, in fulfilling the Pentagon’s new paradigm of air warfare will remain closely scrutinized for decades to come.