Stealth Can't Hide This: Barely Half of America's F-35s Are Ready for Action 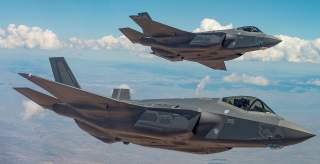 The Pentagon’s new stealth fighter was used in combat for the first time, first by the Israeli Air Force and then by U.S. Marine aviators on an airstrike in Afghanistan. Royal Air Force pilots landed F-35B jump jets for the first time on the U.K.’s aircraft carrier Queen Elizabeth, while F-35Cs designed for catapult-launch from U.S. Navy carriers were test-integrated for the first time in a carrier air wing onboard the Abraham Lincoln in August 2018.

On the industrial side of things, unit costs for the standard F-35A model finally began to decline close to the projected $85 million per aircraft, while flight hours costs declined by $12,000.

Though in September a Marine F-35B jump-jet crashed resulting in the Lightning’s first airframe loss (fortunately the pilot successfully ejected), the loss of one airframe after twelve years of operation is an unusually good safety record.

However, the technical problems and delays that dogged the F-35A program for years have not gone away, as a recently released annual report by the Pentagon’s Department of Testing & Evaluation makes clear (read it here).

The readiness rate for F-35s in operational units “remains below program target of 60 percent, and well below planned 80 percent needed for efficient conduct of Initial Operational Testing and Evaluation.” Note also that in 2018 Defense Secretary Mattis requested all aviation units boost readiness rates to 80 percent.

Worse, there was “no improving trend in fleet aircraft availability,” and the jet was “not meeting interim reliability and maintainability metrics.” Indeed, flaws delayed the F-35’s entry into the IOT&E phase by three months to December 2018—and it was originally intended to begin in 2017.

Due to the low readiness and the need to upgrade early model F-35s that were delivered feature-incomplete, the U.S. F-35 fleet flew only around 78 percent of the sorties expected in 2018. Ironically, a test of sortie-generation that was supposed to involve six aircraft had to be reduced to four “due to maintenance problems.”

In addition to being the most expensive weapon program ever, the F-35 may well be the most contentious. Proponents of the plane, including senior Air Force brass, argue the many new technologies in the F-35 will revolutionize air warfare, and that the program’s high development costs and many teething issues are an unavoidable but worthwhile price for taking the lead.

They point out that the Lighting has performed well in aerial combat exercises and is generally praised by pilots in interviews such as this one with RAF Wing Commander Scott Williams. Thus, proponents argue that F-35 critics pay excessive emphasis on the aircraft’s inevitable teething issues while overlooking its revolutionary potential and focusing on last-generation performance parameters.

Critics argue that the defense industry unnecessarily sought to integrate too many concurrently developed new technologies in the F-35, leading to an airplane that has repeatedly overrun costs and deadlines and failed to meet standard testing requirements until they were watered down to hasten operational deployment. Some also criticize the Lightning’s inferior speed, maneuverability, and weapons-carrying capacity compared to fourth-generation fighters, as well as its limited range.

Category 2 deficiencies, of which the F-35 now has around one thousand, are those which may impede successful completion of a mission.

The report details faults with all three variants of the F-35, which share only about 20 percent of their components in common between them. Many of these faults were reported in the prior annual evaluation—and remain going into 2019.

For example, a carrier-based F-35C jet subject to its third-round of lifetime stress-testing demonstrated cracks in support frame fairing that had been identified in the second round of testing. These problems, combined with five other parts with “pre-existing damage” led to the testing cycle being terminated prematurely so that the aircraft could be disassembled for inspection. Overall, the F-35C exhibited worsening maintainability trends, though reportedly the deployment on the Abraham Lincoln proved highly instructive in developing routines for its integration into carrier flight operations.

Testers didn’t even bother with a third round of testing for the F-35B airframe, as flaws discovered in the earlier rounds of testing led to significant alterations to later production models. However, the report states that F-35Bs procured before those fixes were introduced may have services lives as low as 2,100 hours—out of the 8,000 intended. Bear in mind that early Block 1 and 2 F-35s were not delivered combat-capable, and will require expensive upgrades to bring them to the fully-capable Block IIIF standard.

The F-35A, the only Lightning II variant to carry an internal 25-millimeter GAU-22/A cannon, demonstrated “unacceptable” inaccuracy after nineteen separate test-strafing runs in 2018. You can see the four-barrel Gatling-style cannons being fired in this video.

The DOT&E report is understandably opaque on the results of F-35 combat tests. It notes that live-fire testing of F-35s found pilots were able to safely eject when confronted by three out of four projected types of threats.

However, for a different test of whether an F-35 could safely make it back to friendly airspace after an engagement, the F-35A and F-35C only prevailed against two out four tested threats, and the Marine’s F-35B, only one. The Lightning’s survivability against those threats was still deemed greater than that of fourth-generation F-16’s, however.

The F-35 benefits from a sophisticated mission computer as well as a ground-based logistics system called ALIS, which assists with maintenance and the procurement of spare parts. However, these systems also expose the Lightning to cyber attacks to an unprecedented degree.

The DOT&E conducted multiple tests of the many different software packages used for F-35 operations and reported: “some of the vulnerabilities identified during earlier testing periods still had not been remedied.”

The ALIS is singled out as having vulnerabilities which have not been adequately tested, and the report’s authors ominously suggest: “In light of current cybersecurity threats and vulnerabilities…the F-35 program and Services should conduct testing of aircraft operations without access to ALIS for extended periods of time.”

In fact, the report unleashed a bruising assessment of ALIS’s broader functionality, describing it as failing “to perform as intended,” with “pervasive problems of data integrity” requiring “workarounds” and time-consuming manual input. Coupled with “excessive delays” in implementing fixes, ALIS’s performance was described as impacting F-35 availability and low sortie generation.

Thus while 2018 was a momentous year for the Lightning, the stealth fighter program has yet to entirely turn the corner on its reliability issues.