The Navy's Version of the F-35 Has a Big Problem 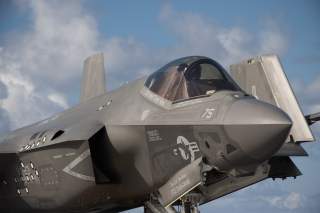 The F-35 Lightning II stealth fighter has weathered years of controversy over cost overruns, delays and performance trade-offs. The Pentagon has steadfastly maintained the type’s ability to penetrate enemy air defenses and network sensor data through its sophisticated computers will prove worth it. Indeed, by 2018, some of the persistent problems seemed to be abating, per-unit costs have begun to decrease, and the type saw its first combat operations serving with the Israeli Air Force and the U.S. Marines.

However, the carrier-based F-35C model has arguably posed some of the biggest technical challenges for the program, and has thus been scheduled last for declaration of Initial Operating Capability (IOC) in 2019. Critics have repeatedly warned that IOC status has basically been declared arbitrarily for all models of the F-35 as a political decision, regardless of persistent technical defects and the fact that testing and evaluation were not yet complete—as is usually the case for IOC systems.

Indeed, in December 2018, John Pendleton of the Government Accountability Office (GAO) testified to Congress that only 15 percent of the Navy’s F-35Cs were rated fully mission-capable in 2017. You can see these figures in this GAO report, which also implies that the figures remain abysmal in 2018: “In June 2018, we reported that the F-35 program had not improved its reliability and maintainability over the past year and continued to fall short on half of its performance targets.”

The Navy’s F-35C is over 50 percent more expensive than the land-based F-35A at roughly $150 million per aircraft. The world’s first naval stealth fighter has dramatically larger “bat-like” wings to help generate the additional lift necessary to execute a short takeoff from a carrier deck. The F-35C also incorporates an arrestor hook to snag the cable while coming for a landing, reinforced two-wheel nose landing gear designed to better endure the harsh impact, and folding wing tips for easier stowage below deck.

The Navy has also tailored the F-35C with larger fuel tanks to makeup for its added weight, as well as compatibility with the service’s drogue probe-and-drogue refueling-system rather than the boom-type used by the U.S. Air Force—though reportedly, the probe’s tips are breaking off worrisomely often. The added weight of these features leaves the F-35C a little more sluggish than its land-based peers, as is typical of naval fighters.

Unlike the land-based F-35A, the F-35Cs do not have an internal 25-millimeter cannon in order to save weight on missions in which it is unlikely to be used. An optional external gun pod is undergoing testing, which has ironically found they perform better than the F-35A’s internal weapon, which has a tendency to drift shots to the right.

An F-35C performed its first carrier landing on November 3, 2014 on the USS Nimitz—making for an undeniably striking sight as you can see in this video.

However, the type’s reinforced nose-landing gear has proven troublesome. In catapult-takeoff tests performed in 2017, pilots experienced severe buffeting due to a vibrating nose-gear strut during launch. This impaired their ability to read cockpit displays and caused them to to report “moderate” to “severe” pain in 92 out of 105 catapult shots. However, this problem only reportedly manifested when not carrying a full combat load. Structurally adjustments to address the flaw are not planned to begin until 2019.

However, the F-35C’s greatest problems may be logistical. Pendleton told Congress: “It took months, sometimes six months or more to get parts repaired and back out to the fleet.”

This is because Lockheed has focused on churning out F-35 airframes as quickly as possible to meet demand, but has not built up adequate reserves of spare parts. This has caused repair capabilities at depots to be “six years behind schedule,” meaning it took twice the expected amount of time to repair parts.

This problem is particularly endemic to F-35s of all types, but all aircraft in the navy and marine corps have been suffering from severe readiness problem related to their ageing inventory. While Air Force squadrons have maintained readiness rates of 60-70 percent, the Navy and Marine squadrons make do with 40 to 50 percent, and have taken to cannibalizing many ostensibly “operational aircraft” for necessary spare parts. This means the actual number of combat-capable aircraft in each squadron is lower than the official number. A requirement set by Secretary of Defense James Mattis to boost readiness to 80 percent in 2018 only succeeded in increasing the rate to around 60 percent for the maritime services.

Nonetheless, F-35Cs began flying regular operational tests from the carrier USS Abraham Lincoln in August 2018 in preparation for the reception of IOC status in 2019. Operating stealth fighters from carriers poses a number of logistical challenges, such as regular maintenance of radar-absorbent materials, instituting cyber-security for the F-35’s ALIS logistics system, and ferrying new replacement parts like the F-35’s power module, which is too large to fit inside available transport aircraft and must be slung under helicopters or vertical-lift CV-22B Ospreys instead. However, the Lincoln’s commander told meda that F-35 operations quickly came to feel routine.

Initially intended to fully replace the navy’s Super Hornet fighters, the F-35C order has been curtailed in favor of maintaining a mixed force of Lightnings and upgraded Block III Super Hornets. The naval fighters have two rolls: striking targets on land and sea, and defending carrier task forces from attacking bombers and missiles. The Lightning’s stealthy radar-cross section is well optimized for the former mission, save for a deficit in range which may force a carrier to approach closer to deadly adversaries equipped with anti-ship missiles. However, the Lightning isn’t designed to max-out speed, which is vital for an air defense fighter racing to intercept enemy bombers and missiles before they can strike their targets.

Indeed, as discussed in this article, the F-35’s sensors, networked with faster Super Hornets carrying heavier weapons loads, could allow the two types to complement each other. The U.S. Marine Corps will also operate five F-35C squadrons from Navy supercarriers, in addition to their F-35B jump jets which can lift off from smaller amphibious carrier.